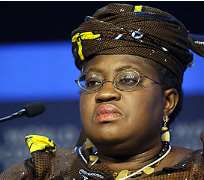 Since the inception of World Bank, United States of America have been producing presidents of the Brentwood institution. But this time around a new tune is brewing and United States may have to be ready for a change. For the first time, there is the possibility, that United States candidate, Dr. Jim Yong Kim may lose the position to Nigeria's Ngozi Okonjo-Iweala. But how is going to happen? It may happen because many emerging nations for first time are asking for inclusion in making monetary and economic decisions in the global institutions including World Bank and International Monetary Fund (IMF). Developing nations and emerging economies contributed more than fifty percent of the global GDP. Many of these nations have decided that the time has come to have one of their own lead World Bank.

Nigeria’s Ngozi Okonjo-Iweala with the most attractive experience and resume might be the beneficiary of the emerging nation’s quest for leadership position at World Bank. Change maybe clumsy and cumbersome but it can be healthy too. Just ask some Nigerians who knew when the country changed from left hand drive to right hand drive. Changing to right-hand traffic was like doing something alien and unnatural but eventually they get used to the change. Change is good for it gives a room for reflection and growth. When change takes place the excluded, the outsider gets the opportunity to become an insider and to pilot the affairs. In most cases change does bring innovation and invigorating ideas with affirmative outcome.

President Obama nominated Dr. Jim Yong Kim, a medical doctor by training and the current president of Darthmont College for World Bank leadership. But with Dr. Ngozi Okonjo-Iweala in the competition for same position, Kim's luck appears to be gradually dimming. Okonjo-Iweala the Nigerian finance minister and former managing director of World Bank, has a solid support from African Union and growing endorsements from many emerging nations. There is no need to re-introduce Okonjo-Iweala to the global community because she had already made a verifiable impact on macro- economics and finance of developing nations as she went through secretary, vice-president and managing director positions at World Bank. Okonjo-Iweala emerging support and glowing endorsements for the position goes beyond Nigeria and Africa.

Many influential news outlets including Financial Times of London and Economist Magazine are recommending her for the job. Even the United States flagship newspaper, the New York Times was extolling her experience and resume. Her fellow economists around the world including Joseph E. Stiglitz who has worked with her and Jose Ocampo, another candidate from Columbia had good things to say about Okonjo-Iweala. Stiglitz wrote recently that Okonjo-Iweala has what it takes to lead World Bank, suggesting that she had already made an impact on the developing world. Stiglitz, a Nobel economics laureate wrote, "Both Okonjo-Iweala and Ocampo understand the role of international financial institutions in providing global public goods.

Throughout their careers, their hearts and minds have been devoted to development, and to fulfilling the World Bank’s mission of eliminating poverty. They have set a high bar for any American candidate." All these endorsements for Okonjo-Iweala do not translate that she will easily be elected to lead the World Bank. United States is not willing to give up the leadership at World Bank and Dr. Kim has already embarked on international tour around the world to seek support and goodwill. President Obama's United States still enjoys an upper hand at the World Bank because of its undeniable influence and power. United States has the most number of votes together with its supportive and willing allies including Europe, Japan and others can easily elect Dr. Kim to replace the United States outing president of World Bank, Robert Zoellick.

Obama's White House may have a compelling reason for nominating Dr. Kim, maybe for the touted compassion quality he brought to his former work at World Health Organization (WHO). But World Bank presidency should based on merit not on compassion. Kim may have been nominated as a result of domestic politics or for Geo-political reasons. When it comes to merit, Okonjo-Iweal stands taller than Kim. All things being equal, the time has come for a new song from a new singer to be heard. Nigeria's Dr. Ngozi Okonjo-Iweala should be considered seriously for this job. She has been at both ends; an insider at World Bank and outsider as Nigeria's minister of finance and former Foreign minister. She is ready for the challenges and rewards of the job.