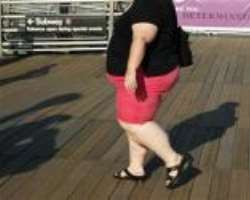 U.S researchers may have found an obesity treatment that unlocks the fat-fighting promise of leptin, an appetite-suppressing hormone once hailed as the answer to the battle of the bulge.

The problem with leptin is that it loses its power in obese people, but a team at Harvard Medical School may have found a way around that problem, they reported on Tuesday.

They said fat mice treated with two drugs already approved for use in humans overcame leptin resistance, raising hopes once again for leptin as a treatment for obesity.

"We are very excited to see what will happen in humans," said Dr. Umut Ozcan of Children's Hospital Boston and Harvard Medical School, whose study appears in the journal Cell Metabolism.

"If it works, this can be a treatment for obesity," Ozcan said in a telephone interview.

The discovery of leptin in 1995 raised hopes for a natural weight loss tonic. Obese mice that lacked leptin lost weight on the stuff. But in obese humans, leptin only brought temporary success.

Ozcan said most people who are obese develop leptin resistance, in which the brain stops responding to the hormone's message to stop eating.

His team found that brain cells of obese mice have increased stress in the endoplasmic reticulum or ER -- a structure within the cells where proteins are assembled.

"This organelle gets stressed or angry. It starts to send signals to say, 'Look, I'm exhausted.' These signals are called unfolded protein response," Ozcan said.

After showing that this stress blocks the leptin response, Ozcan's team set about trying re-sensitize the brain to leptin by reducing the ER stress.

First they gave either of the two drugs to obese mice fed a high-fat diet, then injected them with leptin. "We have seen significant weight loss in these mice," Ozcan said.

"Reduction of ER stress makes the mice sensitive to the leptin, which is bringing new hope for the treatment of obesity," he said.

The next step is to try the drugs in humans.
"We hope it will work," he said.
Obesity is a growing global problem, with 1.8 billion people estimated to be overweight or obese in 2007. Drugs marketed so far to fight obesity have only limited success and, often, severe side-effects.