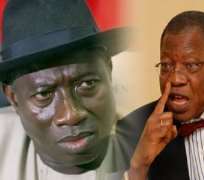 LAGOS, April 05, (THEWILL) - The Action Congress of Nigeria (ACN) has slammed the PDP and the Presidency over what the party described as “hysterical and resorting to the worst form of crudity in their separate reactions to its call on the National Assembly to commence impeachment proceedings against President Goodluck Jonathan for soliciting and accepting a church 'gift' in contravention of the country's laws.”

''For the avoidance of doubt, there was nothing exculpatory in the pedestrian statements issued by the PDP and the Presidency. Instead of employing facts - if they have any - to explain to Nigerians what they felt transpired, they resorted to name calling and endless ramblings. What an opportunity gone down the drain,'' the party said in a statement issued in Abuja on Thursday by its National Publicity Secretary, Alhaji Lai Mohammed.

''While we will not like to deviate from our well-acknowledged style of dwelling on issues to trade words with an increasingly confused and an apparently overwhelmed presidential spokesman and a greenhorn PDP spokesman seeking relevance, we will like to put it on record that their statements are full of sound and fury, signifying nothing' apology to William Shakespeare.

ACN said the presidential spokesman's explanation that the church's renovation is part of the construction company's Corporate Social Responsibility (CSR) and that the church does not belong to Jonathan or his family is too untenable and actually compounds the issue.

''What is this company's track record of CSR in Bayelsa or any other state in Nigeria, where it has obtained billions of naira in contracts? Why did the company choose the President's village to do its CSR? Even if it is CSR, is it not a gift to the President's community. What qualifies that community for this CSR above any other community? Assuming it was even legitimate CSR, shouldn't the President see the obvious conflict of interest in a church where he worships being gratuitously renovated by a government contractor?

''In other climes, the President and the company will give a full account and a full scale investigation will be launched. Instead of the President's handlers to be remorseful for what is, at the very least, a poor error of judgment by the President or his community in accepting this Greek Gift, they resorted to firing darts at imaginary political opponents of the President.

''The reactions never mentioned the fact that the President himself, in his now trademark Freudian Slip, admitted soliciting and receiving the 'gift' from the construction firm. One would have expected that they will put a lie to this by causing the President's speech at the inauguration of the church to be played for Nigerians to hear.

''The truth is that the President's handlers are either grossly incompetent or are terribly overwhelmed by the demands of their office. Otherwise, they would have ensured that the President does not make statement that will put him in bad light. Had they done that, they would have saved themselves from having to issue, in regular intervals, statements that do no credit to the competence and professional standing of those who sign them,'' it said.