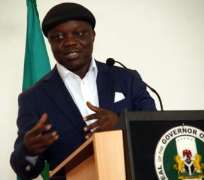 ASABA, April 3, (THEWILL) - Delta State Governor Dr. Emmanuel Uduaghan has announced a 100 per cent increase in the bursary paid to law graduates of the state origin in Law Schools across the country.

The Governor who announced the increase from N50, 000.00 to N100, 000.00 per student while presenting cheques to beneficiaries Tuesday in Asaba, said the increase should take retrospective effect from the last batch. He therefore directed the Chairman of the State Scholarship Board Rev. Buchi Aniyem to prepare a supplementary estimate to accommodate the expenditure.

Amidst applause from the beneficiaries and the audience at the ceremony, the Governor disclosed that his administration spends about one billion naira yearly on bursary and promised to sustain the project irrespective of the capital intensive nature of the programme. He said he has no regret investing so much in the bursary programme, explaining that human capital development was central to the economic transformation of the state.

He however decried the attitude of Students Unions in the state towards the programme warning them to be orderly and act within the ambit of the law or be prepared to face the full weight of the law. He regretted that student union bodies were going beyond their mandate even as he insisted that the government would not allow student union to take over the functions of the State Scholarship Board.

The governor explained that it was the statutory function of the State Scholarship Board to disburse bursary to students and no amount of intimidation or pressure would make the state government shift that responsibility to student union bodies. His words “let NADESU behave and be orderly. If the body fails to change its attitude we will do what is necessary. We will no longer take unruly behavior from the union.”

Prof. Eghagha however invited the Private Sector to partner with the state government in its human capital development agenda. The Commissioner who enjoined students of tertiary institutions to behave maturely and explore the use of dialogue said the days of stampeding institutions were over.

Prof. Eghagha appealed to student bodies to be honest and reduce the problem of fake names on the list. Responding on behalf of the recipients, Barrister Racheal Obodo expressed appreciation to the state governor for the laudable project.

Barrister Obodo said, they were excited over the kind gesture and commended the state government for the increase from Fifty thousand naira to a hundred thousand naira. She pledged their loyalty and support to the administration of governor Uduaghan.