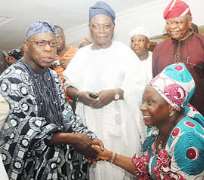 Photo: Sun News Publishing
More Stories on This Section
Former president Olusegun Obasanjo led a delegation of the Peoples Democratic Party (PDP) in the South-west to continue moves at wooing the Accord Party leader and former governor of Oyo State, Senator Rashidi Ladoja back into the party yesterday. The former President's entourage, consisting of the new Vice Chairman of the party in the South-West, Mr Segun Oni, Former Deputy Governor of Oyo State, Alhaji Taofeek Arapaja, former Secretary to the State Government (SSG), Chief Olayiwola Olakojo, former commissioner for Environment during the administration of Adebayo Alao-Akala, Alhaji Mukaila Aborode, among others met behind closed doors with the billionaire politician at his Bodija residence in Ibadan, to discuss modalities for his return to the party.

The meeting was meant to be shielded from public attention, Ladoja's loyalists and members of his Accord Party (AP) stormed his residence, singing, drumming in solidarity with their leader.

Details of the one-hour-closed-door-parley were not immediately available as the parties parried questions from reporters.

But, Daily Sun reliably gathered that it was to paper over differences that led to the collapse of talks preceding the controversial state congress and national convention of the PDP, which forced Ladoja to pull out of the arrangement.

Emerging from the meeting, Obasanjo told journalists that: 'Na condition make crayfish bend and we dey try straighten am. With time, he go straight.'

But Ladoja in a telephone chat told Daily Sun that, 'negotiation with the PDP is on-going.

'The negotiation resumed yesterday where we reviewed the past terms (before PDP convention). The negotiation is still on-going but we were very frank with our terms. I won't call that demands, but terms to move the party, the state and the South-west forward.

'We are still negotiating but in yesterday's meeting were lots of goodwill and progress. We are moving in the right direction.

'Chief Segun Oni, PDP National Vice Chairman, South-west is now to be in charge of further reconciliation. He is to call the next meeting to continue where we stopped yesterday.'

But a chieftain of the party, told Daily Sun that, 'Ladoja will definitely return to the PDP. Already, his wife (Mutiat) had been made a national ex-officio member of the party at the last national convention of the party in Abuja, so tell me how he will be in Accord and his wife will be in PDP.'

But the former speaker of the State House of Assembly and closed confidant of the politician, Mr. Adeolu Adeleke briefing newsmen said, the parley with Obasanjo was at the instance of the PDP Board of Trustees Chairman.

Obasanjo had earlier made overtures to persuade the Oyo State's PDP leadership to correct alleged anomalies in the list of elected local government chairmen and delegates to the party's national convention which held in Abuja on Saturday, March 24 after Ladoja was reportedly played out in the harmonization of the lists based on his pact with Oyo PDP leaders on his comeback bid.

The list was the outcome of the local government congresses in which supporters of the Accord Party leader supposedly returning with him to his former party participated, based on negotiated criteria, whereby the camp that had majority got the chairmanship position in addition to the women leader and youth leader, while the other got the secretary and deputy chairman.

Daily Sun learnt that the PDP stakeholders, in apparent breach of agreement, removed from the list submitted to Abuja, eight of the 10 Ladoja loyalists, who emerged chairmen of the party at local government level and substituted them with their own men.

Obasanjo, who had spearheaded the move to woo back Ladoja, who left the party in protest of perceived 'undemocratic practices, was said to have been unhappy and tried to intervene to have it reversed. But his trouble-shooting attempts to persuade the Oyo delegates to the PDP zonal congress in Osogbo met with a brickwall.