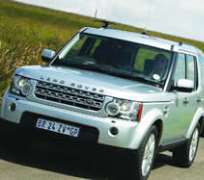 New Discovery 4 on off-road duty
With 36 remarkable awards in less than three years for the out-going model and an enviable reputation that is typically Land Rover, it was almost predictable that he latest Discovery 4 would be nothing but awesome. And it was! Refined or (if you will) born again, the 2012 Discovery 4 boasts almost every innovation that makes the bigger sister, the Range Rover, tick.

Just last week on the outskirts of Johannesburg, South Africa, Land Rover Sub-Saharan Africa unveiled the latest Discovery 4 to select dealers and a cross-section of the continent's motoring press ahead of a long and tasking test-drive. During the exercise, the finely re-made sport utility vehicles (SUV) won the hearts of many a participant with its fresh makeover, extra innovative systems and incredible off-road capability.

It was a well utilized opportunity by the new Discovery 4 to prove its mettle in all its three models, namely S, SE and HSE. Improved Design. Salient design features in the new Discovery 4 include more attractive headlamps; crisp new steering column stalks with chrome bezels; and a new premium pebble-like smart key. Externally, a new 19' alloy wheel comes as standard on the HSE whilst a Gloss Black 20' 5 split-spoke wheel design and extended Satin Black roof rails are available as customer options across the range.

Power and Transmission. There was absolutely no doubt that the enhanced design and equipment levels, consolidate the Discovery 4's position as the most capable and versatile all-purpose vehicle on and off the road today. For instance, all versions of the 3.0-litre diesel engine have been boosted with the same parallel sequential turbocharging system, resulting in at least 83 percent of maximum torque and better fuel efficiency, just as emission level has been significantly reduced.

The most notable update is the introduction of ZF's 8-Speed 8HP70 automatic on the 3.0L twin-turbocharged SDV6. The 8HP70 cog swapper originally made its debut in the Range Rover. The astonishing 5.0 LR-V8 naturally aspirated engine, designed specifically with Land Rover vehicles in mind, remains in the Discovery 4 line-up unchanged for the 2012 model year. One of the secrets of the V8's efficiency is the centrally-mounted, multi-hole, spray-guided fuel injection system delivering fuel at a pressure of up to 2175psi (150bar) directly to each cylinder.

Off-road Capability. Globally, when it comes to off-road ability, Land Rover vehicles are acknowledged as setting the standards for others to follow with its acclaimed Terrain ResponseTM system. For the new Discovery, two additional functions have been integrated into the system – Hill Start Assist and Gradient Acceleration Control. During the off road segment of the over 160-kilometre test-drive, these innovations provided some of the most amazing and exciting moments when they were engaged and demonstrated.

Here is how: Hill Start Assist retains the initial driver-generated brake pressure long enough for the foot to move from brake pedal to throttle without the car rolling backwards. The brake is released after a sufficient time has elapsed or when the engine is supplying enough torque to move the car up the hill. Hill Start Assist is always available, not selectable, and neither is its operation indicated to the driver.

On the other hand, Gradient Acceleration Controls designed to provide safety cover on severe gradients when the driver does not have Hill Descent Control engaged. By pressurising the brake system, Gradient Acceleration Control slows the car to a limit determined by the throttle position when the car is descending the slope in the driver's intended direction of travel.

Entertainment. In the entry level (S) Discovery, a new eight-speaker system with colour display replaces the previous system with black and white display with options for Bluetooth, DAB and USB/iPod connectivity. The Hi-ICE Harman Kardon System in the SE model has been upgraded from nine speakers to 11-speakers and the output boosted from 240W to a substantial 380W, while the Premium Harman Kardon LOGIC 7 system in the HSE has seen the most dramatic improvement, from 14 to 17 speakers and an almost unbelievable increase in output power from 480W to a staggering 825W.

Touch screens have been revised with a new, contemporary style and a 'Virtual CD Autochanger' on models equipped with hard-disc navigation allows storage of up to 10 albums in uncompressed format on the same hard drive. 'Say What You See' voice activation gets over the problem of memorising commands and prompts the driver by displaying commands in a step-by-step format on the screen.

Rear Seat Entertainment (RSE) is now equipped with a single slot DVD drive in the audio head unit so the disc can be conveniently loaded from inside the cabin. This new system replaces the previous six DVD Changer accessed through the luggage compartment.

Launch Date in Nigeria. As at the time of going to press, the sole Land Rover/ Range Rover marketer in Nigeria, Coscharis Motors, had not yet fixed a date for the arrival of the new Discovery 4, but the Head of Marketing, Ifeanyi Nihe, said customers should expect the vehicle which will be coming with petrol engines, before the end of next quarter.