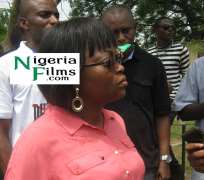 Gunshots and chaos were the order of the day today Wednesday, March 28, 2012 at the Lagos State House of Assembly, Alausa, Ikeja, Lagos as security details of Lagos State governor, Babatunde Raji Fashola fired gunshots to dispersed members of the Association of Nigerian Theatre Arts Practitioners (ANTP).

The members of the Yoruba actors' group staged a peaceful protest against piracy. The protest kicked off from the premises of Lagos Arts and Culture Centre at Radio bus stop, Ikeja before heading to the State House.

At the State House, they were not allowed to enter through the gates as they were stopped by security men stationed at the gate entrance. The reason for that action was as a result of the 60 years birthday celebration of Senator Bola Tinubu at the State House.

A large crowd of members of the film industry barricaded the gate, preventing some top government officials who have come for the celebration to go. They were agitating for the governor to address them on the issue of piracy going on in Alaba International Market, Ojo, Lagos.

The governor sent the Commissioner for Information and Strategy but they insisted on seeing the governor address them.

We learnt that the Lagos State government were aware of today's protest, as we were shown copy of a letter written to the state government and was duly signed to have been acknowledged.

Here are some of the pictures of the protest.