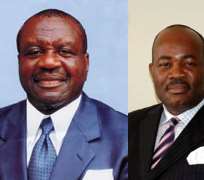 SAN FRANCISCO, March 18, (THEWILL) - The political tension between the camps of Obong Victor Attah, a former governor of Akwa Ibom State, and his erstwhile political godson and present governor of the state, Chief Godswill Akpabio took a dangerous turn at the 75th birthday celebration of former president, Olusegun Obasanjo, following a near brawl between Akpabio and a former Chief Security Detail of Attah, who is presently a top State Security Service (SSS) personnel at the Shangisha, Lagos State Office of the agency.

George Ubeng is believed to be a prodigiously wealthy civil servant who wielded enormous power and influence in Akwa Ibom during Attah’s tenure. He was to Attah what Hamza Al-Mustapha was to late Sani Abacha.

He also led the failed campaign to install Attah’s son-in-law as governorship candidate in the 2007 polls, which eventually produced Akpabio from a pack of more than 20 contestants. Since the bitter primaries, there has been no love lost between the camps of the former and current governors. Recall that Akpabio also served as Commissioner in Attah’s cabinet.

At the Lagos Civic Centre in Victoria Island where a reception was held for Obasanjo, Akpabio and Ubeng renewed their rivalry.

Ubeng was in charge of providing security for the venue and had led a large team of fully armed SSS personnel to the Civic Centre.

Security sources with knowledge of the incident told THEWILL that a heated argument ensued after a fuming Ubeng had confronted Akpabio over an issue.

THEWILL’s source said it looked like Ubeng had followed Akpabio into the rest room at the event where they both later emerged having a heated conversation. A few minutes earlier, Akpabio had chatted privately with another south-south governor at a spot close to the red carpet before he made for the restroom. The governors’ security aides had excused both governors while they were talking.

It was not immediately clear as at press time what Ubeng and Akpabio were arguing over though one source heard Ubeng telling Akpabio that he (Akpabio) could not get him dismissed from the SSS -- Their voices just got louder and louder, according to the source.

As the argument between both men threatened to escalate, the security aides attached to both governors zeroed in to rescue them from the brewing hostility. Ubeng’s security aides also moved in to protect their principal. At this time all the SSS operatives attached to the two powerful men had their semi-automatic weapons drawn. It was like a scene from a mafia movie with one side barking at the other.

In the ensuing melee and chaos, the aides whisked both governors away to safety, while Akpabio’s Chief Security Officer (CSO) Suleiman, who was furious with the development, slapped Ubeng for his perceived rude conduct. Ubeng’s SSS personnel in turn made several unsuccessful attempts to disarm Suleiman after the physical assault on their director. But the CSO refused to let go of his weapon insisting that he would comply only if the order came Director General of the SSS, Mr. Ita Ekpeyong.

But a shell-shocked and embarrassed Akpabio was however not assaulted or manhandled, THEWILL can report.

In a subsequent telephone conversation with THEWILL, Governor Akpabio acknowledged that there was an incident but insisted it was harmless. “Ubeng was a bit rude to me. On sighting me at the entrance of the event, he angrily demanded explanation from me on a certain rumour that I wanted him dismissed from service,” said Akpabio, who claimed to have been unsuccessful with his efforts to dispel the rumour.

“I denied the allegation and made efforts to assure him that my government will at all times protect the jobs and interests of its citizens…. He was indeed very angry but I was calm and kept trying to tell him that this was not the proper place to discuss such matters. However, my security aides observed what was happening and interceded.... I was never rough-handled as speculated.”

Attempts to get Ubeng to comment on the charged incident were unsuccessful as at the time of going to press.