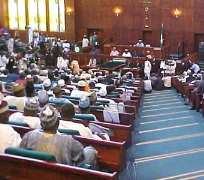 ABUJA, March 15, (THEWILL) - Three months after President Goodluck Jonathan presented his budget proposal for the current year, the Senate on Thursday finally passed a figure of N4.877 trillion, scaled up by N228.3b, for the 2012 fiscal year.

Also today, Senate spokesman, Senator Enyinnaya Abaribe chided the governor of Central Bank of Nigeria (CBN), Sanusi Lamido Sanusi for refusing to defend the bank’s budget, warning that it may be forced to head to the Supreme Court for judicial interpretation of the CBN Act and the Fiscal Responsibility Act.

"Under the CBN Act, there is a provision that the Board of the CBN takes care of its budget. But under the fiscal responsibilities Act, all agencies of government are to bring their budgets to the National Assembly for scrutiny,” he said. “Unfortunately for us, the governor of the CBN is hiding under the CBN Act to refuse to provide the budget of the CBN to the Assembly, and that is a legal matter that we will take up with the Executive,".

Both chambers of the Assembly unanimously passed the same version, thus foreclosing any need for conference to harmonise varying positions.

Explaining the highlights, chairman of the Senate Appropriation Committee, Sen. Mohammed Maccido disclosed that the Nigeria National Petroleum Corporation (NNPC) was appropriated for, and that N888 billion has been provided for subsidy on petroleum importation.

The oil price benchmark for the budget, he disclosed, was raised from initial $70 per barrel to $72 of the projected 2.48 million barrels per day (mbpd) crude production, bringing the excess to N98 billion.

According to him, with the excess, the proposed deficit of N1.126 trillion in the budget was reduced to N146 billion, and Gross Domestic Product (GDP) and Inflation Rate remain pegged at 7.2% and 9.5% respectively, while the exchange rate is N155 to US$1.

Nonetheless, Sen. Macciddo explained that the increase of N4.648 trillion revised provision for the Budget by President Jonathan to N4.877 trillion was to accommodate the introduction of N180 billion to fund the Subsidy Reinvestment and Empowerment (SURE) programme.

He further explained that non-inclusion of certain government agencies in the budget provisions was informed by the fact that their principal, the president, had taken care of them in the budget, stressing.

“This budget is good; so, the president can now go ahead and implement it. The laying of the budget by the executive should be done well before the end of the fiscal year to enable passage within the on-going fiscal year,” Senator Maccido said. "It would be proper if a gap of three months is given between the time of submission and the end of the previous fiscal year, in line with the Fiscal Responsibility Act 2007.

He also advised that the conceptualisation of the budget by the executive should be thorough before it is laid at the joint session of the National Assembly, in order to quicken the passage and an avoid confusion among legislators.

President of the Senate, David Mark urged the Executive to always submit the budget to the National Assembly by September of every year to enable consideration and passage before the end of the year.