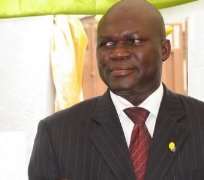 ABUJA, March 14, (THEWILL) - The shocking death of the Deputy Inspector General of Police, Mr. John Haruna and three other high-ranking Police officials in a Wednesday morning air mishap in Jos, Plateau State, has been received by the Presidency with “utmost sadness,” according to a statement by Dr. Reuben Abati, special adviser to the president on media and publicity

“President Goodluck Ebele Jonathan has received with utmost sadness the tragic news of the death of senior police officers in a helicopter crash today in Jos, Plateau State,” the statement read. “The President described the accident as unfortunate and a temporary setback especially at this time that all security forces are making concerted efforts to guarantee security throughout the country.”

Commiserating with families of the bereaved as well as the Police High Command, President Jonathan urged them to take consolation in the fact that the fine officers died in the course of national assignment, and prayed that “Almighty God will accept the souls of the deceased and grant the nation the fortitude to bear this national loss.”