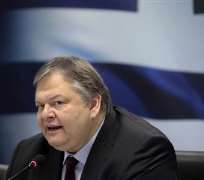 Greece averted the immediate threat of an uncontrolled default on Friday, winning strong acceptance from its private creditors for a bond swap deal which will eat into its mountainous public debt and clear the way for a new bailout.

With euro zone ministers set to approve the 130 billion euro ($172 billion) rescue, French President Nicolas Sarkozy declared the Greek problem had been settled - just as Germany said that any impression the crisis was over "would be a big mistake".

Markets sharply marked down the value of new Greek bonds to be issued to the creditors, reflecting the risk of paralysis after elections expected this spring and doubts about whether Athens can bring its debt to a more manageable level by 2020.

Sarkozy, who is trailing his socialist challenger for the presidency before France's own elections in April and May, pronounced the Greek deal a major success.

"Today the problem is solved," he said in the southern French city of Nice. "A page in the financial crisis is turning."

Euro zone finance ministers held a teleconference call and were expected to declare Athens had met the tough terms of the bailout, its second since 2010, and to authorize the release of funds which the country needs to meet heavy debt repayments later this month and avoid bankruptcy.

On the streets of Athens, some Greeks denounced the deal as a sham that would impose more crippling austerity on a people already enduring pay and pension cuts and soaring unemployment.

German Finance Minister Wolfgang Schaeuble was also in a more somber mood than Sarkozy, issuing a warning to Athens which has a record of failing to meet its promises of reform and austerity made to international lenders.

"Greece has today got a clear opportunity to recover. But the precondition is that Greece uses this opportunity," he told a news conference. "It would be a big mistake to give the impression that the crisis has been resolved. They have an opportunity to solve it and they must use it."

Under the biggest sovereign debt restructuring in history, Greece's private creditors will swap their old bonds for new ones with a much lower face value, lower interest rates and longer maturities, meaning they will lose about 74 percent on the value of their investments.

"A VERY GOOD DAY"
Data published on Friday underlined the depth of Greece's problems. It showed the economy shrank 7.5 percent in 2011, marking the fourth successive year of recession.

That was worse even than 1974, when Greece's military dictatorship collapsed following a confrontation with Turkey over Cyprus and as a leap in oil prices hit economies around the world. That year the Greek economy shrank 6.4 percent.

Nevertheless, Greek Finance Minister Evangelos Venizelos hailed the bond swap, which the European Union and IMF had demanded in return for the new bailout, as marking a long-awaited success for all Greeks enduring a painful recession.

"I hope everyone will realize, sooner or later, that this is the only way to keep the country on its feet and give it the second historic chance that it needs," Venizelos, who led often ill-tempered negotiations with the EU and IMF, told parliament.

He said the bond deal had cut its debt by 105 billion euros.

The Greek finance ministry said creditors had tendered 85.8 percent of the 177 billion euros in bonds regulated by Greek law. This would reach 95.7 percent of all privately-held Greek debt with the use of "collective action clauses" to enforce the deal on creditors who refused to take part voluntarily.

Jean-Claude Juncker, who chairs the Eurogroup of euro zone finance ministers, was expected to say that EU and IMF inspectors believed Athens had kept its side of the bargain.

According to the draft of a statement, obtained by Reuters before its expected release later on Friday, Juncker will say everything is in place for the euro zone to deliver its part of the bailout package and that he looks forward to a significant IMF contribution.

The IMF welcomed the high acceptance rate by private creditors. "This support by the private sector is a key component of the contribution by all parties to put Greece's economy on a path of growth and financial stability," it said.

The IMF's board will meet on March 15 to discuss its contribution. The Eurogroup is expected to release funds next week as Athens must have the money by March 20 when some 14.5 billion euros of bond repayments are due, which it cannot hope to repay alone.

"The PSI is a sham, it won't save us. Our pockets are empty and there is more austerity under the table - just wait till after the elections," said 54-year old housewife Mary Vetsi told Reuters outside parliament.

Reforms demanded by the EU and IMF along with deep budget cuts have provoked serious violence in Athens and helped propel unemployment well over 20 percent.

The country also faces elections in April or May when the pro-bailout conservatives and socialists face an array of smaller parties to the left and right that reject the rescue, and may struggle to form an effective government.

Traders priced in the profound doubts surrounding a program which aims to cut Greece's debt from a towering 160 percent of its annual economic output now to a slightly more manageable 120 percent by 2020.

On the grey market, they indicated prices far below the face value of new bonds which will be issued to creditors on Monday.

Spanish and Italian bond yields fell following the Greek announcement. However, those on debt issued by Portugal, which has also been bailed out by the EU and IMF, rose as investors looked for the euro zone's next weakest link.

The deadline for acceptance of the offer for bonds governed by international law and for state-guaranteed bonds issued by public companies has been extended to March 23.

Athens confirmed it would enforce the deal, activating collective action clauses (CACs) on the bonds regulated under Greek law. It will not be so easy to force holders of the minority of bonds governed by foreign laws to come to the table.

Using the CACs is likely to trigger payouts on the credit default swap (CDS) insurance that some investors hold on the bonds. The International Swaps and Derivatives Association is meeting on Friday to decide whether Greek CDS will pay out.

"It almost now certainly going to trigger CDS. If this doesn't trigger it, nothing will," said Nick Stamenkovic, a bond strategist at RIA Capital markets in Edinburgh.

Venizelos played down the consequences. "The net amount at stake globally if CDS are triggered is less than 5 billion (euros)," he told parliament. "This is a totally negligible sum for the Greek and the European economy."

NO FAITH
Despite the success, the deal may at best buy time for a country facing its biggest economic crisis since World War Two.

Markets showed investors have no faith that the bond swap will draw a line under the country's troubles. Under Greece's austerity and reform program, its debt burden in 2020 should fall to where Portugal's is now.

If investors believed Athens could succeed, yields on Greek and Portuguese bonds should be similar. But on the grey market, the new Greek bonds were yielding 17-21 percent, far above Portuguese levels around 11-14 percent.

"The market is pricing a high risk premium which reflects uncertainty over upcoming elections in Greece and reform implementation risk," said one Athens dealer.

Public support for the two parties that back the bailout - those in the coalition of technocrat Prime Minister Lucas Papademos - remains low.

"After the elections, no matter when these will take place, we (must) have a government of authority, determined to walk the difficult path of reforms. Otherwise, all sacrifices that were made will be wasted," said the Athens financial daily Imerisia.

Resentment has grown among ordinary Greeks over the austerity medicine ordered by international creditors which has compounded the pain from a slump which has seen the economy shrink by a fifth since 2008.