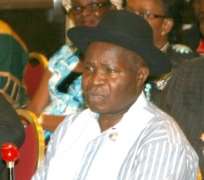 Nigerians desperate for political appointment or reappointment will not stop at doing anything to retain their position or get reappointed and that seem to be the case of Nigerian Ambassador to Venezuela, Ambassador Chief Felix Oboro who has been in the news since last year for various wrong reasons. Again, our reporter in Abuja was reliably informed in a social event which recently took place to congratulate some newly screened and cleared political Ambassadors.

The social party was organized by a top politician in Abuja for some of his political friends and associates nominated for Ambassadorial appointments. The occasion was attended by who is who in the political class.

When it was time to advise some of the newly nominated political Ambassadors, it was as if every politician present had the same mind: Do not behave the way our Ambassador in Venezuela did, do not implement Nigeria's foreign policy in your village style, make sure you operate within the law and do not prove ignorant of the law, do not put your hand into public funds, be friendly with your staff, do not misuse your privileges, report events and developments early to the government of Nigeria and realize that you are now under the Foreign Affairs Ministry.

Unfortunately for Ambassador Oboro, his name surfaced at this occasion when one of the invitees who apparently did not know who he is, was tutored there by a Niger Deltan politician who took the floor to inform invitees on Ambassador Felix Oboro. Chief Oboro is seeking reappointment as Nigerian Ambassador to Venezuela but from what this reporter analyzed in the social gathering; retaining him would be a liability to President Goodluck Jonathan administration. It is obvious, our politicians know themselves and what each one of them is capable of doing.

This reporter gathered in the social event, that Ambassador Oboro had been queried by the appointing authority, the Foreign Affairs Ministry based on allegations leveled against him and published widely by online media earlier in the year. From a reliable source in the political circle, the Ambassador admitted of wrong doing but the Foreign Affairs Ministry has not taken any action on the matter. The said Ambassador of course has been parading himself and boastfully telling anyone who cares that he has been told to remain in Venezuela.

May be Ambassador Oboro did not use discretion in Venezuela. If not, he would not have taken himself to the gallows for hanging; his fellow politicians do not admire his report card released to the press by his political competitors who have better credentials and competence than him in Bayelsa State, his State of origin.

This reporter also gathered that Ambassador Felix Oboro gave copies of the query he had received from the Foreign Affairs Ministry to some politicians who attended the social party and his self-indicted reply without knowing that they will refer to it in form of advice to others. By giving copies of the query and his reply to some politicians, he might have wanted them to intercede on his behalf without knowing that certain politicians frown against the alleged looting of tax payers' fund at the Embassy in Venezuela.

What is the rationale behind the attempt to re-appoint him when for four years he was idle by not reporting events and developments to the government of Nigeria? What is the basis for retaining him in that position when it was known that he violated the privileges given to him by the Venezuelan government? What is the yard stick to measure his performance to warrant his re- appointment to the same country or doesn't he know that Nigeria has a lot to benefit from Venezuela? Or does some interest have to profit for his reappointment to Venezuela?

This reporter at the function was also reliably informed that the said Ambassador owns private bank accounts in Yenagoa and elsewhere, stashed with diverted government funds; this act is committed in collaboration with the accountant in the Embassy who also is a co-signatory to the bank account of Nigeria's international organization in Venezuela. Some years back, Ambassador Felix Oboro was dragged before a judge in Port Harcourt during which he used his position to subvert justice on the said matter. Those clamoring for his reappointment should therefore ask questions.

A politician from Bayelsa State who does not want his name in print states that ¨Bayelsa State wants to produce Ambassadors that will be respected internationally when they talk, not someone whose record in the (Bayelsa) State is at very low ebb. Why does he want to remain in Venezuela when he has not achieved anything for the State and Nigeria during his tenure as Ambassador? ¨

Ambassador Oboro is not concerned because to him he has settled those that need be at the Foreign Affairs Ministry for his re-appointment to Venezuela or any other country. The Bayelsa State politician went further to state the policy of Bayelsa State Government that: ''Take Federal appointment but bring Federal presence to Bayelsa State. So, what has Chief Oboro brought to the State in four years except for threats, blackmail, embarrassments and voodoo he uses to settle scores. So, those wishing to re-appoint him will only put their honour at stake''. The same politician also informed this reporter that "Ambassador Oboro defected from PDP to Labour party when the fortune of PDP nosedived in Bayelsa State, only to return to PDP when the soup has been put on the table. Information at our disposal is that he will soon defect to another political party that has promised to fund the expansion of his fish pond to be seen as the best in Niger Delta."

But Ambassador Felix Oboro is only a metaphor in Nigeria's collapsed system. Nigeria is one of the few countries where a man with such a sordid wastage of public funds could still aspire to clinch Ambassadorial appointment after admitting that he spent tax payer's funds without regard to the law. The irony of the whole situation is that it was not as if there is no check and balance but the political and administrative leadership in the Foreign Affairs Ministry appear to have allowed him to go scot free not only because he is from Bayelsa State but because he attracts people with oil bunkering he would do on their behalf.

Public appointments such as Ambassadorial appointment should naturally be for people who are found worthy not just in qualifications but also in performance and character, if in doubt, leave out, since there are questionable issues in the character of Ambassador Felix Oboro, let his State Governor nominate a new person with integrity to replace him. This is most regrettable, it is particularly sad that such a person could still remain as Nigeria's Principal Representative under a Minister who until recently was a career Ambassador himself to South Africa. May be there are things that I do not know as a reporter in this matter. Every attempt to get information from the Foreign Affairs Ministry is made impossible by no comments response. Why has Ambassador Oboro's reply to the query authorized by the same Minister not attended to? His case should not receive a turn away or blind eye situation, it is situations like this that continue to give Nigeria a bad name outside and probably responsible for the extra security checks Nigerians are subjected to while traveling abroad.