When Did Man Begin To Use Cutlery? 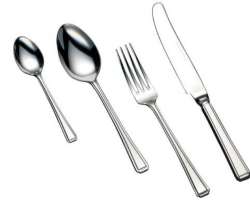 Let's see if you can figure this out by using logic. Imagine the time when knives, forks and spoons didn't exist. Which one of them do you think man would “invent” first?

Not a knife — because man can tear his food apart with his hands. Not the fork — because he can pick it up with his fingers. But for picking up liquids, especially hot liquids, he needs a spoon first.


In fact, spoonlike implements have been found going back to the stone age! The Egyptians had spoons made of woods, stones and ivory. And the Greeks used spoons of bronze and silver.


When man begun to use the knife and fork, however, he really made a great advance in dining. And this advance came about quite recently in history. Only three hundred years ago, knives and forks were great curiosities. As a matter of fact, in France everyone ate with his fingers until the 17th century.


This doesn't mean that knives and forks didn't exist before that time. The primitive mind actually used a kind of fork, but it was nothing like ours. It may have been made of a small pronged twig.


As far as is known, the first real forks were long, two-pronged utensils made of iron, bone and hard wood. They were used only in cooking and for holding the meat as it was being carved.


Forks were being used for dining in the 11th century, but only a few people were so dainty that they had to have one. The knife, of course, was one of man's inventions, in the sense that he made a cutting tool of flint or other stones.

But there was no such thing as a table knife in early times. Even three hundred years ago, it was so rare, most people didn't know about it.


After the 17th century, table knives were introduced in England, and soon they became popular. But the poor people couldn't afford them, and so most people still ate with their hands.