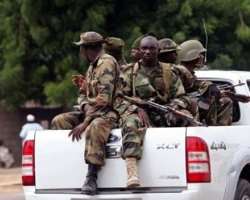 MAIDUGURI, March 05, (THEWILL) - Three suspected members of the Boko Haram Islamist sect were today shot dead in their attempt to raze a public primary school in the north-eastern city of Maiduguri, Borno State.

Spokesperson of the Joint Task Force in the State, Lt. Col. Hassan Ifijeh confirmed that soldiers shot the suspected members in Maiduguri and arrested two others.

The sect has burnt seven schools in Maiduguri over the last two weeks in its plot to oust western education, and is reported to have been responsible for the killing of more than 300 people this year alone.