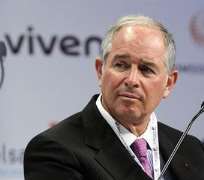 Blackstone Group LP (BX.N) co-founder Stephen Schwarzman got about $213.5 million in salary, share of profits and cash distributions from his holdings in the world's largest private equity firm in 2011, up 33 percent from the previous year.

Schwarzman, 65, who co-founded Blackstone in 1985, got most of his payout from dividends on his 21 percent ownership of the private equity firm and realized investments from funds predating the company's IPO in 2007.

Schwarzman's salary was only $350,000, unchanged from last year, and he has not taken any bonuses since the company went public, according to a regulatory filing on Tuesday.

The structure of Schwarzman's pay is intended to align his interests with Blackstone's investors, with the logic being that he makes money when his investors do.

Still, the size of the payout could raise eyebrows at a time when the industry has come under renewed scrutiny, thanks to Republican presidential hopeful and former private equity executive Mitt Romney.

The composition of Blackstone's dividend income has also been changing since the company went public.

Blackstone has historically made over two-thirds of its private equity revenues from its slice of the profits from its buyout business. But fees have made up the majority of Blackstone's cash distributions every year since the company went public.

The shift is increasing concerns at pension funds, university endowments and other investors - which provide the funds for private equity firms - that public listings of firms such as Blackstone means stockholders are being favored over them.

While these investors, or limited partners, focus on returns on their investments, shareholders want dividends that can come from management fees, as well as carried interest.

At Blackstone, Schwarzman got $134.5 million in distributions for his partnership units in the firm, while $74 million came from cash distributions from Blackstone legacy funds and investments, the company's annual filing with the U.S. Securities and Exchange Commission shows.

In 2010, he got $2.5 million in cash distributions from legacy funds, with the difference in 2011 due to more of those investments being realized.

He got nearly $5 million in executive compensation for 2011, most of it coming from carried interest, or share in profits that Blackstone made for investors.

Chief Operating Officer Hamilton James got $52.6 million from salary, bonus and holdings in the private equity firm in 2011. That compares with $54.8 million in 2010.

Blackstone does not disclose Schwarzman's and James's income from co-investments.