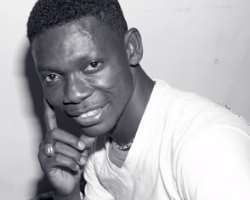 Adu Kofi, otherwise known as Agya Koo, has said that his excellent performance in Ghanaian movies, which has attracted many admirers to him, is a gift from God.

Despite the normal procedure of reading thoroughly a script before acting in films, he told Joy FM`s Kojo Oppong Nkrumah that actors and actresses are given their scripts two weeks ahead of time before they go on location (where the film is supposed to be shot), but due to his God-given talent, when given a role to play he does so perfectly without going by any script.

Although he originally arrived in Accra to sing, Agya Koo has been featured in over 90 Ghanaian movies, 15 of which remain his favorite, since his introduction to the Ghanaian film industry.

Agya Koo said currently due to his popularity, like other well-known entertainment personalities, he receives about 50 calls from women daily.

`I receive not less than 50 calls from ladies on a daily basis but not in a negative way. Some of them just want to know who I am, some seek advise from me on how to enter into the film industry, while others just express appreciation about what I am doing,` he added. Married with two beautiful young girls, Agya Koo said these calls never affect his time with the family or marriage life, since his wife knows that he is not doing anything wrong with these ladies.

According to him, his popularity has grown to the level which makes him spend more hours to move from one place to another because of thick crowds he normally encounters whenever he appears in public places.

He revealed that whiles some praise him others insult him saying `you are too foolish in films.` He said that majority of Ghanaians do misinterpret roles played by actors and actresses to be real.

On the issues of football and politics, Agya Koo said he did not have much interest, adding that one could experience heart attack with serious football matches if care is not taken.

About politics, the Ghanaian actor and comedian said it should be done in such way that it will bring peace to the nation.

Agya Koo has a great following in and outside Ghana. He started out as a local stand-up comedian but has grown into his own man, breaking a new ground in Ghana`s acting history.

We caught up with the funnyman in the Bronx, NY as he was preparing to go to Germany for a triple event and then finally bound for Ghana.

In a brief interview; Agya Koo first and foremost expressed his sincere gratitude to the US fans for their patronage and expressed his appreciation to Papa Shee'e for offering his help when he arrived in New York for his comedy show.

He said he has great projects in the pipeline which include; a new album slated for release in 2008; his own film production where some scenes would be shot in the Bronx, New York and a documentary on his life. He pointed out a song he did in collaboration with an artiste and was getting major airplay in Ghana.

The down to earth and very friendly Actor who has taken the world by storm felt proud as he spoke about a huge number of new Ghanaian movies set for release very soon. This shows a great demand for Ghallywood in the diaspora. “HIP-HIP-HIP HOORAY” TO THE GHANAIAN FILM INDUSTRY.

He said he would be taking his next show in America to another level so fans should expect more from Agya Koo, the pride of Oseikrom in the future.

Agya Koo and a host of others have been credited with completely transforming the face of Ghanaian films like never before.

Agya Koo, aka “Braam”, one of Ghana's most popular actors has said that he flew out of the country to Spain last month as a result of unending telephone calls be was receiving from his fans who wanted to know whether he was dead or alive.

According to him, he was receiving not less than 120 calls a day from fans, local radio stations, family members and friends. “Some were saying that they had heard that I was dead and others too said I was seriously sick”.

“For over 18 years now I have never fallen sick neither have I even taken paracetamol. Me, I don't fall sick so I don't go to the hospital. In fact I can't remember the last time I went to the hospital”, he said.

Agya Koo said he did not know where that rumour came from and was of the view that it may have been a plan by some people to discourage him from acting.

Agya Koo said when he realized that the rumours were becoming too much, he left the country to avoid all the calls since he had already been invited by one Mr John Kwaku Ofori and Madam Adwoa Gyamfuwaa to perform at Spain with Oheneba Eissi.

He said, however that he had not received any call since he returned from Spain about three weeks ago. He said his performances there attracted a lot of people and has received many invitations from some producers out there to perform again.

Talking about his contribution to the local movie industry Agya Koo said there has been tremendous demand for his movies because of his style of acting.

Agya Koo said he acted differently in every movie due to the fact that he has been chosen because of something that he could be identified with.

“I knew I had to come up with something that would be difficult to copy so I always create new things. I create and act but I don't read a script and that is what makes me different from others” he said.

Agya Koo said he had not specialised in a particular area in acting. “I can act any role that I will be given to me by my director, Sometimes I play the role of an old man, lover bay, rich or poor man.

He said Ghanaians are enjoying his movies because he is a funny person.

Whenever he opens his mouth, he comes up with rib-tickling comments. Even when he is addressing a serious issue, he has a way of playing with words to the mirth of his audience.

“I have so far acted in about 60 movies and I love that. I am most of the time given a free hand to work around the characters I play and it is challenging because I have got to do it right.”

Currently, Agya Koo said he has established his own company called Te Te Mbofra (TTMF) Movie Production at Kumasi and have so far produced three movies.