WE MUST MAKE PDP NIGERIAN- FRIENDLY 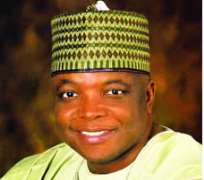 Babayo
Every aspirant in the race for national chairman of the Peoples' Democratic Party (PDP) agrees on the urgent  need to put machinery in place towards reforming  the party that prides itself as the largest political party in Africa.  According to them, restoration of the vision of the founding fathers of the party and genuine reconciliation are needed to make PDP electorate- friendly.

But one man believes  he is best placed  to  restore the party normative  values and imbue the confidence of the PDP faithful in the national leadership  at Wadata Plaza.

In this  exclusive interview with Daily Sun, Dr.  Musa Babayo,  acting national secretary of the party, declared that his membership of the Peoples' Democratic Party  National Working  Committee in the last four years, remained his unique selling point for the office of national chairman.

As a founding member of this party, right from inception  in 1998, I have remained committed, loyal and focused on our party, the PDP I have the rare privilege to serve at the  highest level of its leadership, the National  Working Committee. First, as deputy national secretary and second, as acting national secretary from June last year till date.

During this period, I have the rare privilege  to serve in virtually all the  major  critical standing committees of this party and I am still involved in the working and management  of its bureaucracy. I am the chief administrative officer of this party, as at now. These combined, give me a practical insight into the opportunities  and challenges confronting the PDP.  That knowledge has given me a leverage to know what these major issues are and what is required to comprehensively resolve them.

So, in a sentence, the incoming chairman  of this party  should be someone, who has the vision, the capacity, the integrity and, above all, knowledge of the internal environment of this party to pro-actively begin the process of reform so that the PDP, as a political party, can be seen as Nigerian-  friendly.

Therefore, this knowledge of the party internal environment, which I have acquired over the last four years, makes me to have the confidence to present myself as a candidate for the position of national chairman of this party, to be elected during the forthcoming national convention on the 24th March, 2012. So, my desire to cause a positive change to happen in the major policy thrust that motivated me to offer myself to lead this party  at this critical period of its existence. So, that's the reason.

About three issues are very constant, any time the PDP stakeholders discuss the challenges, facing the party:  how to ensurie reform, reconciliation and entrenching party discipline. How do you intend to address all these?

Well, the issues you mentioned are really the defined characteristics of what a new PDP should be concerned about. The issue of reform, the issue of internal democracy, the issue of promoting good organisational governance in line with best international practice and establishing a strong intellectual foundation, which are key requirements and how I intend to achieve them is simple.

This  party was founded and established on some basic and fundamental principles  by the founding  fathers  and members. The values of integrity, the values of equity, of transparency. These are the major defining values. The fact that these values aren't  being operated at the optimum is a clear sign that there is problem and, therefore, the need for reform.  Therefore, in line with this, we intend to rebuild, redirect and reconnect. It embellishes  our major strategic political vision  of rebuild, redirect  and reconnect .

The values that I mentioned earlier on are the values which we want to rebuild our  internal democracy by ensuring that our electoral system are improved upon and in the process, reducing the level of acrimony, rancor and bickering within our membership in all the states chapters.

We will do that with transparency, with integrity, in accordance with the major  strategic vision of our administration and major policy thrust of rule of law  and due process. We believe that if we are able to rebuild  some of these major issues of internal democracy,  of rule of law and due process, within our party, the public perception of the PDP, its image  will begin to rise to logical consequence. Which means, the current sloganeering of rebranding is  meaningless, if those basic dynamics aren't there. So, we want to reconnect the office by rebuilding its basic institutions with the Nigerian public and the various publics within the party itself.

When we have successfully rebuilt on reform, we will move to the next step which is the reconnection. We have defined what the issues are, we have made significant breakthrough in terms of rebuilding them and now we begin to redirect them towards  meeting the aspirations  of our entire membership so that people can begin to  see  the impact of the reform in a positive way, not by merely dictating to them but by seeing it in all practical purposes; that this party is now rejuvenated. When we redirect our energy and our rebuild value system and norms then, we collectively, move together in a determined path. To reconnect the party  which is now reformed, which is now rebranded in content and character with millions of Nigerians under its umbrella.

That moves us to the third step which is the reconnection stage  It basically does one thing among others: developing a very strong and effective communication  strategy, so that the internal domestic environment within the party itself will now be carefully externalised in a consistent and clearly defined manner.

Some have observed that the cause of disaffection in states controlled  by the PDP is  the control of party secretariat, by governors, who see the secretariat as an extension of the governor's office.  How do you  intend to address this?

Well, it is a perception of Nigerians and probably membership. Our governors, who are our leaders in our states, as the current practice in our party, vis-a-vis our various state chapters, they want a perfect harmony. Political organisations, vis-a-vis the government that they formed at various levels shouldn't be managed or run from a position where, they operate as if they are islands unto themselves.

They shouldn't be mutually exclusive;  rather, they should be mutually inclusive because politics is a game of dialogue.

The party is the father and the mother of every elected and even appointed person within the government that the party has formed.

So, no leader of the party at whatever level is bigger than the party.

They work together and what is required is to have leaders  at all levels of the party, who have the humility, the capacity, vision and determination to work with their elected leadership.

If you give a platform to a candidate to run for an election and he wins, that doesn't make him a more important member of the party than someone who didn't run. Therefore, a person or groups of persons shouldn't be perceived to be stronger than the platform, which gave him the leverage in the first place to  run for an election.

The arrangement we have in the PDP is very good; I may not say it is perfect because there is no perfection in anything that is human. But taking the current arrangement and the fact that this political  party with all its achievements, one can reasonably say and conclude that we are still in the process of learning and democracy is an old concept, starting from the Greek state.

You aren't the only one in the race from Bauchi State; are you not worried that with the likes of former governor  Adamu Muazu, your ambition is being threatened, right from  the home front?

Well, you know, if are you  saddled with the responsibility of selling a product, your primary responsibility  is to  the product, which you are saddled to market. Your concern should be about giving a strong brand and your brand is what will determine your market positioning.

But what is your competitive edge, that you think places you above all the other  aspirants. I mean your  unique selling point?

I  say with all humility, this national working committee,  which I have the rare privilege to serve organised the most credible and fair presidential primary in the political history of this country; a primary that saw to the emergence of President Goodluck Jonathan as our candidate and eventual election as president, which was adjudged as the best and credible in the country, both by local and international observers.

Just recently, Supreme Court made a decision about tenure extension of five governors and  this national working committee, as at last count has taken four states. Not by accident but as a result of careful planning  and knowledge of the working committee of what it takes to win election.

Today, by the special grace of God and through the efforts of this national working committee, we control most of the state assemblies across the length and breadth of this country, including the National Assembly. If you recall, we conducted the primary that produced our candidates for the last general elections in this country and the governorship elections, which we just won.

These are major achievements and I have been a major participant, a major player in all of these. That gives me an edge. In an examination, when you pass, you get  a promotion because that's the reason of examination.

Above all, managing a political party is different from managing a limited liability company. It is much more than that. This national working committee has  rare privilege of being the only NWC in the history of this party to have spent its four-year term; it had never happened before it. It isn't accidental but because  a lot of support, of hard work went into it,  otherwise, probably the situation would have been different.

So, these are facts that people can check and my decision as earlier on mentioned to present myself as  a candidate  for election is borne out of  service and desire for service of this party so that we will be able to sustain the current reform initiative, which we have embarked upon because this party is our party and we want it to continue to grow.