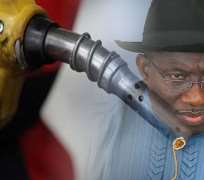 When President Goodluck Jonathan alonside his economic shenanigans led by the former World Bank magician, Mrs Okonjo Iweala, the 100 million naira valentine gift giving Central Bank Governor, Mallam Sanusi Lamido Sanusi and the Petroleum Products Pricing Regulatory Agency, PPPRA argued that the amount of money paid to some faceless oil cabal as subsidy was hurting the nation and in order to free the economy from corruption, over pricing, over payment and all manners of illegality, all forms of subsidies would have to be removed on New Year day, not many believed and were disposed to such a fatal policy. Nigerians both at home and abroad saw the Greek gift as one coloured with insincerity and simply saw it as yet another castle in the air which should never be allowed to have a foundation.

Nigerians led by the heavily compromised Nigerian Labour Congress, NLC and fellow counterpart, the Trade Union Congress, TUC braced for a showdown with the government when the latter insisted there was no going back on the subsidy removal. For the first time since the June 12 protests, the vast majority of the people came out enmasse to vent their anger and show their displeasure in a manner that neither threatened national security or the corporate existence of the country (even as the government of the day had deployed stern looking soldiers to Lagos and elsewhere, claiming some elements where hell bent on hijacking the peaceful protests).

As a result of the embarrassment the likes of lawyers led by the Fawehinmis, artists led by Daddy Showkey and friends, religious groups and human rights activists led by Pastor Tunde Bakare, youths, market women and children where throwing at the government, the President whose approval ratings and popularity had reached an unprecedented low appeared on national television to tell the vast majority of Nigerians what they had heard before and the unrealities of the subsidy removal. The speech was nothing new and appeared to further aggravate the anger in the polity.

Since the turn of democracy in Nigeria in 1999, no Presidential speech had witnessed widespread criticisms other than the ones President Jonathan had made during the subsidy brouhaha. They were capricious, insincere, filled with sweet talk and smacked off a campaign to further malign the Nigerian people. As a result of the fact that the President and his economic team where desperate, wanted a compromise and needed the strike to end as quickly as possible because of its attendant socio-political and economic effects, they firstly told a bewildered Nigerians that a transportation scheme had been evolved to ease travelling costs and make transportation accessible to all.

This writer alongside millions of Nigerians were marvelled to hear Labaran Maku, Olusegun Aganga and Senator Idris Umar, all Ministers in President Jonathan's cabinet that the first batch of 1600 mass transit buses had been taken delivery of at a 10 billion naira revolving loan. This writer is less concerned about the money used to purchase these buses, for it had always been a norm for ten percenters (to borrow a leaf from Nzeagwu's 1966 coup speech) to inflate contract prices, but the viability of these buses during and after the strike. Where the buses enough to ferry over 70 million Nigerians who travel on a daily basis? Has the second, third or fourth batch of mass transit buses been bought to further cushion the effect of subsidy removal? Which of the government agencies monitor these buses for better cordination? These are simple questions President Jonathan and his team should be able to answer.

However, the January 7 speech delivered by the President urged Nigerians to prepare to make sacrifices, but government on it's own part would undertake several measures aimed at cutting the size and cost of government coupled with efforts to reduce the size of current expenditure and capital spending, reduction in overseas trips, overhead costs by Ministries, Departments and Agencies, 25% reduction of basic salaries of all political office holders in the Executive arm of government (even though the legislative arm of government gulps 25% of the nation's budget).

Other measures included the full rehabilitation of the Port Harcourt - Maiduguri Railway Line and completion of the Lagos - Kano Railway Line, the immediate commencement of a Public Works programme that will engage 10,000 youths across the federation, creating additional 370,000 jobs and also steps to further sanitize the oil industry.

Having said this, the Ministers told a listening Nigerian public that the President had directed all MDA's to pay the monthly salaries of public service workers by 20th of January, in order to enable them cope with the effects of the subsidy removal and also asked that the monthly meeting of the Federation Accounts Allocation Committee, FAAC be brought forward to the 15th of January in order to facilitate revenue sharing for the month. Aside this, in order to make the subsidy removal one that will promote and justify government's initiatives, the Subsidy Reinvestment and Empowerment Programme Document otherwise known as SURE was drawn.

The SURE programme had been hurriedly drawn in the wake of the subsidy strike to douse tensions but after more than four weeks into the end of the strike, the SURE had suddenly become ludicrous and old fashioned. This became evident at the 58th National Executive Committee meeting when the President told chieftains of the Peoples Democratic Party that the implementation of the palliatives to cushion the effects of subsidy removal were no longer feasible. He argued that the palliatives had been based on 100% removal of subsidy on local consumption of fuel and as a result of its failure to achieve this, he orderd PDP members to withdraw the circulated SURE document.

This policy reversal has led to criticisms from all sections of the country, most especially many who believe had been vindicated on their exposure of the lies peddled by the Jonathan administration on the subsidy removal. Many have also argued that since the trade unions where so blind and lame to have seen the insincerity in the words, gestures, actions and speech of the President and his retinue of political elites, they should not cry blue murder.

This writer, however, have always told people who cared to listen that the emergence of President Jonathan as a leader was a mistake and for that reason, many shouldn't have trusted the man who claimed to Nigerians he never wore shoes to school. A leader must at all times be upright and fulfill whatever policy emerges from his government. The withdrawal of the SURE document is just one out of the many measures the government had promised to embark upon. All of them were bound to fail from the start because those interested in subsidy removal where only looking for ways to impoverish the people, yet further line their own pockets.

We the people must as a matter of urgency begin to hold responsible all those who dubiously pulled a fast one on us as far as the subsidy removal was concerned. We must ensure that policies which turn out to have stunted growth at the start are not accepted. We must let the Jonathan administration understand that goodluck is not the road and path to come into government, for those who rode on such path never triumphed at the alter of purposeful and sincere democracy. The President should ask Hosni Mubarak.