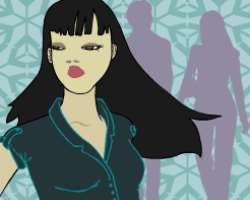 Imagine this ... you and your sig other are walking in the mall and this hottie strolls by and catches your eye. You hardly even look up, but before you can say half-price sale, your girlfriend is giving you the business. "Did I just catch you looking at her? You think she's hot, don't you?"

Or how about the last guy you were dating, the one who bought you a pager so he could know where you were all of the time? You thought it was sweet that he wanted to know your every move. He was just a little jealous. There's nothing wrong with that ... right?

Wrong! They don't call jealousy the green-eyed monster for nothing! Jealousy can be destructive to a relationship. We're not talking about being jealous of your best friend's new relationship, or jealous that someone else got picked to start in the game instead of you. "Everyone has feelings of jealousy sometimes," says 16-year-old Eric Nana from Cape Coast, Ghana . "Sometimes I'm jealous of people who get better grades, or who drive nicer cars." But jealousy in an intimate relationship is a whole different story!

Why do people get jealous in the first place? According to therapist Julie Duhigg, jealousy is often rooted in insecurity. "People get jealous when they are uncomfortable with who they are," she explains. "When you are not secure with yourself, anything seems threatening, like outside friendships or even crushes on celebrities." So, if you're worried that your girlfriend is about to run off with Brad Pitt (who, last time we checked, was happily married), you may want to work on that self-esteem!

Some people think that jealousy is a sign of affection and love. But you should think again if your partner doesn't trust you to do things by yourself or to spend time with your friends. When someone starts tracking your every move and is in your face all the time about where you've been and whom you've been with, then it's time to rethink whether this is a healthy relationship.

"Possessiveness and controlling behavior are serious red flags that you are probably in a relationship that could turn dangerous," Duhigg notes. Some warning signs could include

* Your partner wants to know where you are and whom you are with all of the time.

* Your partner makes you feel guilty for spending time with family or friends.

* Your partner thinks that innocent conversation equals flirting and gets angry about it.

On the flipside, if your sweetie doesn't get jealous when you talk to other people, or when you hang posters of hot celebs on your wall, it doesn't have to mean that she or he doesn't think or care about you! It may simply mean that your relationship is built on trust and respect.

What if you think that you have reason to be jealous? Like, maybe you saw your honey cozying up to some cutie, and you felt a little knot in your stomach? That's normal. We take it for granted, even if we don't talk about it, that our serious, intimate relationships will be exclusive — not shared. But before you let feelings of jealousy take over, talk about it! "Don't take your feelings of insecurity out on someone else by being crazy jealous," says Nibii , 17. "Tell your boyfriend or girlfriend that you feel uncomfortable with the situation." Nibii is right. Chances are, if there is good communication in your relationship, you can work it out and keep that green-eyed monster far away!