HOW TO TRANSFORM NIGERIA'S EDUCATION SYSTEM (1) 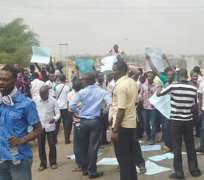 This is a true story and it is not an isolated event. Data from Nigerian Universities Commission (NUC) shows that only about 23per cent of students, who enter Nigerian universities have a credit pass in English language and Mathematics. With very poor foundation from the secondary schools nationwide, most of our university students are poorly equipped for focused and productive intellectual academic pursuits.

Many buy passing grades from unscrupulous lecturers with money and sex. Therefore, many university graduates in present day Nigeria are just like the junior lawyer who 'forgetted' to do the assignment that was given to him.

An illiterate population is a fertile breeding ground for terrorists, tribalists and dangerous, gullible, volatile superstitious miscreants in society who can be manipulated by disgruntled elements to ferment and ignite great havoc in society. Nigeria therefore direly needs to educate her citizens throughout the country as a matter of great priority. A revised education curriculum that includes the study of the Nigerian Constitution at all levels of education will be a potent tool for nation building. Great national values such as Democracy, Social Justice, Equality, Non-tribalism, Human Dignity, Accountability, Rule of Law, Respect for Diversity, and Tolerance, can be taught as part of the educational curriculum, and brought to life in the classroom in a manner that will transform each student into a valuable and decent citizen, permanently.

1. THE PROBLEM OF MASS FAILURE IN WAEC
The following data from West African Examination Council (WAEC) on the performance of students nationwide in WASSCE over the past six years revealed that the percentage of students with five credits including English and Mathematics ranged from 13.76per cent (2008) to 27.53 per cent in 2005.

PERFORMANCE IN WASSCE, 2005-2010 (Source: WAEC)
YEAR NO OF CANDIDATES %WITH 5 CREDITS INCLUDING ENGLISH AND MATHEMATICS

SOLUTION TO THE PROBLEM OF MASS FAILURE IN WAEC
The problem that shows up as mass failure in WAEC every year is only a symptom of a bad disease that was there all along which could have been diagnosed and treated by standardized and nationwide exam from Junior Secondary school (JS1). Academic weaknesses of the students will be detected earlier. Poor performing teachers whose students do poorly on the standardized exam will be warned and assisted to do better; but if the teacher continues to perform poorly, he/she will be replaced.

There will be no more automatic promotion. The performance of each student on the standardized national exam or a local repeat exam after remedial studies will be a factor in promotion to the next class. If, at every level of their educational experience, both teachers and students put in same level of effort that they expend every year in preparing for both Junior and Senior WASSCE, the outcome of their learning experience will be remarkably different. By the time a student gets to SS3 under this structure and discipline, the performance will be better and WAEC mass failures will be history. We will still work on teacher motivation and commitment, improvement of facilities and infrastructure where possible and necessary.

2. PROBLEM OF ACCESSIBILITY AND ENROLLMENT IN SCHOOLS

The Nigerian Constitution states that 'government shall strive to eradicate illiteracy, and to this end, government shall, as and when practicable, provide:

•Nwangwu, a professor of pharmacology, toxicology and clinical pharmacy, presented this paper, titled 'How to Transform the Educational System in Nigeria for the Immediate Benefit of the Nation', at the 2011 National Youth Summit, held at International Conference Centre, Abuja.