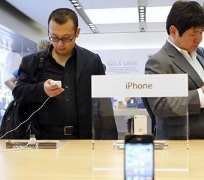 Apple, which became the world's largest smartphone vendor in the fourth quarter, will see its iPhone market share slipping for a couple of quarters as the novelty of its latest 4S model runs out, research firm Gartner said on Wednesday.

Apple saw its iPhone sales more than double in the last quarter when it took a 24 percent share of the smartphone market, helped by a 15-month period before the 4S model was launched, which created a lot of pent-up demand.

Gartner said Apple's strong performance will continue into the first quarter of 2012 as availability of the iPhone 4S widens, but without the benefit from delayed purchases sales would decline from the previous quarter.

In contrast to Apple's blow-out quarter, former smartphone market leader Nokia saw its share of that market fall to 12 percent from 30 percent just a year ago.

Gartner said it saw growth in the overall cellphone sales volume slowing to 7 percent from 11 percent growth seen last year, while smartphone market growth would slow to 39 percent from 58 percent.

"In some of the regions economic conditions have slowed down the replacement market. Consumers are more cautious," said analyst Roberta Cozza.