I am not a terrorist – Comrade Sunny Ofehe 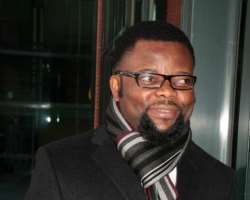 Sunny Ofehe is a Nigerian born environmental activist based in Rotterdam in the Netherlands, he recently on 1st February 2012 clocked 40 years on earth and his family and friends both in Nigeria and abroad decided to celebrate him despite charges of terrorism against him at Rotterdam court, a charge brought against him by the Dutch government last year.

Pastor Elvis Iruh was one of the guests invited for the occasion editorial staff of Nigerianvoice.com seized the opportunity to speak to Comrade Sunny Ofehe.

The case of Sunny Ofehe could be a script from the Nigerian movie scene; in 1995, he fled from Nigeria under the Abacha military regime when human rights activists were been persecuted; he seek political asylum in the Netherlands and he was granted one and over the years, he has lived peacefully and obtaining Dutch citizenship. However his activism continued; in 2005, he founded the now very famous Hope for Niger Delta Campaign (HNDC) organisation with headquarters' in Rotterdam, the Netherlands, an organisation whose primary aim is to set a paradigm for the restoration of hope and the establishment of a peaceful Niger Delta. As part of information dissemination, the HNDC started the production of a monthly Niger Delta Diaspora magazine called "Inside Niger Delta Magazine". This is the first of its kind outside Nigeria. He is the CEO/MD of this new venture.

His activities soon spread into organizing and hold seminars, conferences in the Netherlands to draw attention to the plight of the ordinary people of the Niger-Delta. Initially, he enjoyed cordial relationship with the Dutch government and most of his activities were sponsored but once he attacked the multi-national oil company, Shell associated to the Dutch government; they stopped funding its projects and a stale relationship began.

At the apex of his advocacy, Sunny Ofehe led a team of three Americans and a Dutch to the MEND camp to appeal for peace. He also made a short documentary on Niger Delta plight that was aired on Dutch television. Following that, he became the person to speak to if foreign journalists needed specific information or footages on Niger Delta in the Netherlands.

Mr. Ofehe told our correspondent that his expansive contacts with foreign media organisations travelling to the Niger Delta by providing them local contacts including those of militant leaders made the Dutch authorities jittery and probably they started looking for a means to silence him.

His birthday party bash turned into a gathering of support for him as he declared in his opening statement, “I am not a terrorist, I have never been one and I would never be one. I am a human rights activist fighting the course of my people of the Niger-Delta from Nigeria”. His declaration was greeted with applause. Comrade Sunny Ofehe confidence that he would be clear of the charges is in no doubt. He told our correspondent, “it is just a matter of time, I would be cleared, I have no criminal records for all the years I have lived in the Netherlands, I am a law abiding citizens and all my activities are properly documented and conducted in the open so how can I be a terrorist”, he asked.

Then what does he think is the problem? He said, 'what happened was that I accompanied a Dutch MP to the Niger Delta. She was sent on a fact-finding mission by her parliament. The international NGO, Friends of the Earth, dragged Shell to court on behalf of Ogoni farmers, whose lands have been destroyed by oil pollution. When Shell challenged the jurisdiction of a Dutch court to hear a case that supposedly happened in Nigeria, I organised series of protests outside the court. The court finally ruled that it had jurisdiction. Meanwhile, a Dutch journalist visited the Niger Delta and returned with yet another damning report. Dutch parliamentarians felt it was time they invited Shell for a talk. Shell declined their invitations. Unwilling to put up with Shell's discourtesy, the parliament summoned the oil giant to a public hearing on the Niger Delta crisis. The date of the hearing was fixed for January 26 last year. Before the hearing, it was decided that two MPs should visit the Niger Delta on a fact-finding mission; one from the Labour Party and the other from the Socialist Party. The Socialist MP, her name is Sharon Gesthuizen. Her people decided that I accompany her to the Niger Delta which I did. I also was invited to make a presentation during the public hearing on the case I had against Shell in the Niger-Delta. I did and since then, I became a target of the power to be here in the Netherlands”.

According to Mr. Ofehe, first I was harassed in Nigeria, arrested, interrogated by the SSS in Abuja but later released when they discovered my story was true.

However on 22nd of February 2011, Sunny Ofehe was arrested at his home in Rotterdam in an early morning raid in the presence of his four young children and wife; he was taken away and kept for three days in confinement until they brought allegations of human trafficking and money laundering against him. After months of investigation, probably they did not found any genuine evidence to nail him. The charges were changed to terrorism allegation.

Sunny Ofehe later discovered that they have been tapping his telephone conversations to Nigeria over a period of time including the period he was negotiating with the Niger-Delta militants to stop their bombing campaigns and kidnappings; in fact he negotiated release of Dutch kidnapped oil workers in the area.

To his amazement, Comrade Ofehe is charged to be financing the militant groups to blow up oil pipe lines belonging to Shell in Nigeria.

I asked him, is there any truth in this allegations?

“I am absolutely innocent and God will vindicate me, if they have any prove, let them produce it in court, my legal team are working day and night to clear my name and I am grateful to them”. Sunny Ofehe has no shortage of legal support, apart from his Dutch legal team; he has a brother, Barrister Alex Ofehe and a close friend, Barrister Festus Keyamo adding legal heads together to free him from this ordeal.

Asked him what keep him going despite these challenges; Comrade Sunny Ofehe says the sweet memory of his late mother. That itself is sad event in his life, on 4th October 2007 while he was in Holland; hired assassins broke into his family home in Benin city, abducted and murdered his mother in cold and till this day, Nigeria police has not found the murderers or those behind it.

According to Ofehe, my mother's death is in connection with my activism but I don't know the killers. I have repeatedly said that as long as the Nigerian government does not fish out the killers I'll continue to hold them responsible.

What about your safety then, 'my life is in God's hand, I know I have no enemies, I am fighting a just fight for the betterment of my people although I am more careful but I leave everything to God'.

On the birthday party, he said his family particularly his wife, Mrs. Dorothy Faluy-Ofehe decided to celebrate him despite all the persecution he is going through and he is very grateful to all those who honoured him with their presence, gifts, face book messages and phone calls and physical attendance of the party in Rotterdam.