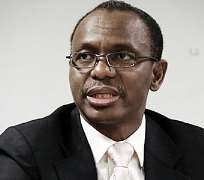 I hear from good sources that while the arrest of Kabiru Sokoto the ‘Niger-Sahel militant’ was welcome by many Nigerians as good news, some had gloomy faces and tried to force a smile. One such people may have been Mallam Nasiru Elrufai. In an interview some months ago, Mr. Elrufai said “ A few days ago, I saw on the internet pictures of some people covering their faces, wearing jeans and saying they are Boko Haram; that Southerners should leave the North. I am sure that those people are not Boko Haram. Boko Haram people don’t wear jeans. They wear kaftan... I believe that beyond Boko Haram, which is a metaphor for dissatisfaction with the state, there is something going on.”

Mallam Elrufai must have been embarrassed by Kabiru Sokoto’s very western look. He looked like a UK based Nigerian postgraduate student who arrived Heathrow for the first time, flummoxed by the speed of express trains. Kabiru Sokoto was wearing a Puma T-shirt and a Levis Strauss jean, two solid American designers that according to Elrufai, Boko Haram will never wear. Elrufai painted the picture that Boko Haram was moulded after the Taliban, a serious terrorist group with a sound religious ideology and strong chain of command; a group with doctrines: even a doctrine of attires. Anyway, its either Kabiru Sokoto was probably showing off his obvious fitness, or Elrufai was trying to send out a wrong message to give a deceptive picture of the evil group, in order to deceive security agencies.

Elrufai is well aware that his opinions are highly regarded in many Northern quarters; he is also aware of the loyal followership he has on facebook and twitter and knows that painting a virtual picture of a Boko Haram member as always dressed in Kaftan may sink into the brains of security agents. If they had bought that picture from Elrufai’s good thinking, Kabiru Sokoto may probably be having a bottle of beer right now (even though Elrufai will want us to believe that Boko Haram will never taste alcohol). The other reason for his assessment may be that he is just out of touch with the situation in the North; or possibly unaware of the impoverishment that the Northern elite class who have held power both in Nigeria and in the Hausa Kingdoms for decades have brought upon their people.

How else can we explain the nearly two million Almajiris in Kano, as counted in 2006, when Elrufai was a cabinet minister? Why did this appalling figure not bother the Mallam, who ordinarily should be interested in the plight of these destitute kids who innocently set out to like Nasiru, become Mallams? The impoverishment and deliberate oppression of the poor in Northern Nigeria has impacted greatly on the Almajiri system. The Almajiris are frustrated that afterall they will never become Ulamas or Mallams; that the title of Mallam, even now, has become an exclusive preserve of the oppressor aristocrats.

I follow the discussions of Mallam Nasiru Elrufai on his Thisday column because for me his writings are in some significant way, the amplified whispers of Nothern elites, many of whom also share his sympathy for the Boko Haram sect, albeit quietly. I don’t have a problem with a FG/Boko Haram dialogue; in fact I want almajiris rehabilitated through a system that will eventually empower them to become good Mallams or if they so decide, good technicians with trade skills. However, I find it laughable when Elrufai and his compatriots suggest that the militants of the North must be treated just as the militants of the south-south. Mallam Elrufai’s small frame may not fit properly into a military or paramilitary uniform, but he has an acumen built enough to understand, that it more expedient to negotiate with an enemy that has been weakened considerably, especially when the state has the capacity to do so with minimum force. That is what the United States is doing with the Talibans, and that is what President Yar’Adua he did when he commanded the Nigerian military to invaded Niger Delta.

I put it to Mallam Nasiru Elrufai that if the only condition Boko Haram gives to the Federal Government to stop the senseless killing of innocent citizens in the North was for the complete control of their resources, it would be the easiest concession the President may have to make: there is nothing much to negotiate in that. When militants in the Niger Delta gave that same condition, government had to negotiate – they negotiated amnesty; amnesty not as a solution but as a therapy to stimulate oil production. The FG also promised to address the core issues that led to the agitation in the region.

I will love Elrufai to once again analyse the figures as he is well versed in matters of quantity; analyse how much the country earns from the success of the amnesty programme versus the FG’s investment the programme. I hear professional quantity surveyors care about value for money: there has never been better value for Nigerian money. With Boko Haram the FG will not be negotiating for oil or ... (don’t even know what else we export), but for human lives; lives of Christians and Muslims alike. What is the value of life, and how do you negotiate for lives? This is my simple question for Elrufai.

This mallam has a friend who also is a mallam, a friend who surprisingly believes Elrufai is the smartest person he has ever known *(eyes rolling)*, that guy is the Governor of the Central Bank of Nigeria. In a syndicated attempt by these two to politicize the terrorism in the North on the platform of national economics, these respected Northern intellectuals in different media suggested that the 13 per cent derivation accruing to the Niger Delta and the disparity in distribution of national wealth as engendered by the derivation principle is the key cause of the emergence of Boko Haram. This is simply stupid, and as usual, intended to manipulate and sell another picture of Boko Haram; this time not on dress code but their reason.

Mallams Nasiru Elrufai and Sanusi Lamido are out of touch with the issues of their people. They are high flyers who have flown so high that they now see the many mud huts in the North as points on a map. The 13 per cent that is allocated to the Niger Delta actually goes to the states. The funds are channelled into infrastructural development. Yes, there is corruption, but there is also evident progress in terms of infrastructural development and reduction in poverty level. What these Mallams fail to realise is that there are a group Northern oil mongers, most of them ex-military rulers who collectively net over the 13 percent that accrue to Niger Delta states.

A few Northern generals share over 15 per cent of Nigeria’s oil wealth. Their companies have the best oil mining leases over the best oil blocks, and have entered into very profitable production sharing contracts with oil majors who operate the fields. These companies have directors who are Man Fridays for these Hausa-Fulani civil and post civil war conquerors. These companies of theirs receive more oil money than the entire Niger Delta. Some are not generals, some were ‘generals’ in the Customs service, and have controlling shares in companies that control ports/FTZs and make more money that any Niger Delta state. There are others who were not uniformed generals, but have received titles reserved for Generals, simply because they wisely invested the loots of Generals.

Like Elrufai, I am trying to paint a picture: a picture of the root of Boko Haram. I am positing that some few Northern individuals- military and civilian generals- benefit over 15% of the nation’s oil wealth, while the Niger Delta only gets 13%; that the Niger Delta is not the problem with Boko Haram: the northern elites are. The wealth of the North; its 15% derivation from oil and politics is private hands. They have failed their people.

Their insatiable quest to rule and to dominate their poor and to retain a perpetually subservient proletariat class, in a very brutal class order, rolled over since the early days of the Fulani hegemony have fostered only poverty. It is a wicked class order that has disrupted and extinguished the stars of the Almajiris on the altar of the senseless chase of power, position and prominence.