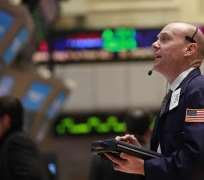 Stocks edged lower at the open on Tuesday as investors awaited the outcome of discussions on a bailout package for Greece from international lenders that would help the country avoid a chaotic default.

Greek Prime Minister Lucas Papademos negotiated through most of the night with lenders from the European Union and International Monetary Fund over more fiscal reforms as trade unions staged a national strike against more cuts.

A Greek government official said the nation is preparing the text of an agreement on a 130-billion euro bailout that must be put to political leaders for approval, suggesting Athens had largely wrapped up talks with lenders.

"Markets would love to see some certainty, and we don't have any of that at the moment," said Frank Lesh, a futures analyst and broker at FuturePath Trading LLC in Chicago.

"On the equities side, we've come a long way, and we are getting into overbought territory, so most of us are expecting a bit of a pullback or a period of consolidation - the depth of the pullback really depends on Greece and the European debt problems."

A disorderly Greece debt default could lead to increased fiscal problems for weaker members of the euro zone and dampen the U.S. recovery.

The benchmark S&P index had risen for five straight weeks on the back of improving U.S. economic data, punctuated by the Friday payrolls report, to lift the index up almost 7 percent for the year. A light economic calendar this week has shifted investor focus back to the euro zone.

According to Thomson Reuters data through Tuesday morning, of the 301 companies in the S&P 500 posting results, 60 percent topped expectations, tracking below recent quarters at this point of the reporting season.

UBS predicted more weakness in investment banking after a restructuring of the business failed to prevent an earnings hit from the euro-zone debt crisis and worries about the global economy. Shares dipped 2.5 percent to $14.01 in New York trade.

ArcelorMittal (MT.N)(ISPA.AS) forecast improvement in the first half of 2012 after a weak end to last year, with a clear pick-up in North America but continued concerns about Europe. U.S.-listed shares of the world's largest steelmaker rose 1.8 percent to $21.83.