KEBBI CRISIS GETS MESSIER AS… 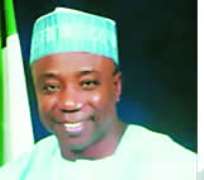 Aliero & Dakingari
After a long protracted political battle between former Kebbi State governor, Adamu Aliero and his estranged political godson, Governor Saidu Nasamu Dakingari, there are strong indications that the hope of Aliero returning to the Senate, at least, in this current political dispensation, has been sealed.

This is sequel to the decision of the Appeal Court, sitting in Sokoto, which last Thursday, dismissed Aliero's petition, for lack of merit. Although, Aliero did not run against the governor directly in the contest, Aliero's victory, Daily Sun learnt, would have dealt a decisive blow on the political future of the governor since the 2011 elections was largely to test who, between the two, held the political ace in the state.

Aliero was instrumental to the return of Sokoto and Kebbi States to the Peoples Democratic Party (PDP) before the 2007 polls. He is now a chieftain of the Congress for Progressive Change (CPC) and leader of the party in the state. He originally contested against Senator Atiku Bagudu of the PDP during the last election.

Although Aliero's hope of bouncing back to political limelight may have been dashed, Dakingari still has one more hurdles to cross. The outcome would go a long way to confirm who is truly in control of power and politics in the state, as the governorship battle shifts to the Supreme Court for the second record time. So far, of the 14 cases filed against the PDP by the CPC, PDP has won 12, losing one, with one, the governorship, still pending. Determining Aliero's fate last Thursday in a unanimous summary judgment delivered by Justice Amiru Sanusi and two other Justices, Datti Yahaya and Sidi Bage, the court held that the lower tribunal, which struck out Aliero's petition for being 'time barred' after it was sent for retrial on merit, did not err in law. The lower tribunal had in August last year, invoked Section 18 (11) of the Electoral Act and nullified the election of Bagudu of the PDP, while declaring Aliero winner.

But Justice Yahaya said after careful scrutiny of the submissions, the court set aside the rulings of the lower tribunal, saying the lower tribunal erred in its judgments against the appellants, therefore, its action was a nullity. The court also granted the reliefs sought by the PDP and its candidate, relating to the striking out of certain paragraphs in the petition against Bagudu. The contentious paragraphs deal with criminal allegations.

When the re-constituted Election Tribunal took over the case, Bagudu challenged the jurisdiction of the tribunal to re-hear the case, contending that the matter had exceeded the 180 days provided by the Constitution to hear such matter. The lower tribunal upheld the objection of Bagudu and struck out the petition.

Dissatisfied, Aliero appealed to the Court of Appeal again, contending that upon remittance of the petition for hearing on its merit, a fresh 180 days had been generated for the hearing of the petition. But the Justices of the Appeal court were, however, not swayed by this argument, and dismissed the petition.

Meanwhile, Aliero, last Friday, barely 24 hours after the Appeal Court judgment, gave the indication that he was now going into 'serious rice production.' He said his Labana Rice Mill, Birnin-Kebbi, was scheduled for commissioning in March.

According to him, the effort was a collaborative venture with the Federal Government. The mill has the capacity to produce eight metric tons of rice per hour and could employ 2,500 youths.

'We are going into serious rice production, not only within the state but also the neighboring states and, perhaps, even beyond. We want people to embrace dry season farming. We are prepared to assist by way of giving irrigation equipment, which would be paid in form or kind.'

The former governor said the company was also into partnership with some corporate bodies in Niger Republic, which utilised the bank of the River Niger with very large expanse of land, for rice production, to produce rice three times in a year. 'Our plan is to replicate what they do there, here in Nigeria for mass food production.'