VISIONS OF ECSTASY GETS UK RATING AFTER 23 YEAR BAN 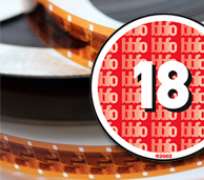 The only film ever to be banned in the UK on grounds of blasphemy has been given a certificate 23 years after it was made.

Visions of Ecstasy showed 16th Century Spanish nun St Teresa of Avila as she caresses Jesus' body on the cross.

It was banned amid concerns the scene could leave the film open to prosecution for blasphemous libel.

As the blasphemy law was repealed in 2008, the movie has now been passed for release uncut, with an 18 certificate.

Directed by Nigel Wingrove, the low-budget, 19-minute film became a cause celebre for the free speech movement, with the late filmmaker Derek Jarman among the voices calling for its release.

The British Board of Film Classification (BBFC) said it had considered allowing the film to be shown with the offending scene removed – but as that would have halved the running time, they said their only option was to refuse a certificate.

Wingrove unsuccessfully appealed the ruling and the distributor eventually took the case to the European Court of Human Rights in 1996.

Although the court did not consider whether the video itself was blasphemous – a matter for the UK courts – it ruled that the UK's blasphemy laws were consistent with the European Convention on Human Rights.

In its conclusion, the court said: “Freedom of expression constitutes one of the essential foundations of a democratic society. However, the exercise of that freedom carries with it duties and responsibilities.

“Amongst them, in the context of religious beliefs, may legitimately be included a duty to avoid as far as possible an expression that is, in regard to objects of veneration, gratuitously offensive to others and profanatory”.

'Reservations'
Once the blasphemy law was abolished by the Criminal Justice and Immigration Act 2008, the BBFC invited Wingrove to resubmit his work.

Speaking to the Guardian in 2008, Wingrove said he was in two minds about accepting the offer, which had come “completely out of the blue”.

“If I made the film now I would make it very differently,' he said. “I was exploring areas of dark eroticism, but I had worked chiefly in prints, not films.

“People say I should put it out, but on a personal level I have reservations. If I did release it, I would need to put it into context and perhaps release a documentary to accompany it.”

Nonetheless, the film has now been cleared for release. In a statement announcing the decision, the BBFC said: “With the abolition of the offence of blasphemy, the board does not consider that the film is in breach of any other UK law that is currently in force.”

But it added: “The board recognises that the content of the film may be deeply offensive to some viewers.

“However, the board's guidelines reflect the clear view of the public that adults should have the right to choose their own viewing, provided that the material in question is neither illegal nor harmful.”

Almost 1,000 films and videos have been banned in Britain since the BBFC – formerly the British Board of Film Censors – was set up in 1912.

Most of these decisions date from the earlier years, when the rules on what could be portrayed on screen were more strict.

In more recent years, the Board has typically refused classification to one or two works a year.

The latest example was a DVD called The Bunny Game, which was rejected in October 2011 for scenes of sexual and physical abuse.