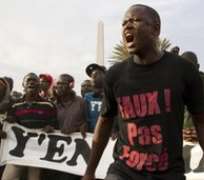 Two people have been killed in the Senegalese capital during a demonstration against President Abdoulaye Wade's re-election bid.

Police and thousands of opposition supporters clashed in the centre of the city on Tuesday evening.

Tear gas was fired and one student died when he was run over by a police truck.

Earlier in the week, two people were shot dead during protests in a northern town after a court ruled that Mr Wade's third-term election bid was legal.

The opposition June 23 Movement (M23) had organised the demonstration and has sworn a campaign of “national resistance” until Mr Wade's rescinds his candidacy.

Elections in the West African country – often held up as one of Africa's model democracies – are due on 26 February.

Once a veteran opposition leader himself, Mr Wade, 85, was first elected in 2000 – ending 40 years of rule by the Socialist Party.

Senegal's constitution has a two-term limit but the constitutional court has ruled this does not include Mr Wade's first term, which began before the clause was adopted.

At the same time as allowing Mr Wade to stand, the court ruled singer Youssou N'Dour and two other opposition candidates could not run.

The US has warned that the ruling could jeopardise Senegal's long-standing record for democracy and political stability.

Mr Wade's campaign spokesman, Amadou Sall, has said if opposition supporters do not want Mr Wade as president they should go to the polls next month.

“Every five years the Senegalese citizens have the right to express themselves… on 26 February if they decide they don't want no more Abdoulaye Wade for president, Abdoulaye Wade will not be president, so it's all in their hands,” he told the BBC's Focus on Africa programme.