Why we never have sex! 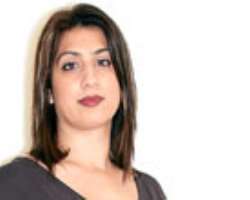 A new survey reveals one in eight British women under 50 have gone without sex in the past 12 months, including those who are married and cohabiting.

Dr Petra Boynton, a psychologist at University College London, says: "We are constantly being presented with inaccurate data that everyone is at it like rabbits, which makes people feel worried. Sex is overhyped in our culture."

Here, five women tell DIANA APPLEYARD why they have missed out on sex for a year or more...

TWO YEARS: CAMILA NUSSO,
31, is a hairdresser and lives in Cheshunt, Hertfordshire, with her husband John Alexandrou, 32, a mechanic, and their two-year-old daughter Alexia.

My husband John and I have been without sex for almost two years, after I lost all interest when our daughter was born.

It was a shock to us both as we'd always been sexually active and in those early years couldn't keep our hands off one another.

We've been together for six years and married for three-and-a-half and I can honestly say that having a child has taken the edge off our sex life.

We made love right up until I was almost eight months pregnant, but then John stopped initiating it.

He'd never have said that he was put off by my huge bump because he wouldn't have wanted to hurt my feelings.

I endured a traumatic birth which involved a 48-hour labour, a Caesarean at the last minute and complications which meant I almost had a heart attack while I was in theatre.

Alexia was a real handful, crying constantly. I suffered a bout of postnatal depression and sex was the last thing on my mind.

John was sympathetic to start with, but as time wore on his patience wore thin and he'd sometimes get angry with me for not wanting to make love. The trouble was, while he still saw me as sexy and attractive, I felt like a worn-out mummy.

When John's sex drive showed no sign of abating, our love life - or lack of it - really started to come between us and caused lots of arguments.

No matter how unsexy you feel, you can't give up on sex when you're married. When you're both trying to adjust to being parents while continuing to work, sex is often the only time you get to be close to each other. I missed that feeling. I just couldn't bring myself to make love.

At my wits end, I've just spilled the beans to one of my best friends, who's been having similar problems. She suggested I try a herbal arousal oil called Zestra, which helped bring back her own sex drive.

I ordered some from the internet - thank goodness I didn't have the embarrassment of buying it over the counter - and amazingly, we're all primed to break our sexual deadlock after nearly two years.

I won't be having any more children for a while, as I want to concentrate on getting my marriage right first.

I haven't had sex since I lost my lovely husband Chris. It isn't the sex I miss so much as the intimacy.

The worst time in the day for me is climbing into bed at night alone. When Chris was alive, going to bed at the end of the day, chatting about what had happened and having a cuddle, as well as making love, was something I always looked forward to. It's something I miss so much.

I never made a conscious decision not to meet anyone else. I have dated other men, but no one who I've thought could be special.

Chris was such a wonderful dad. Minutes before he died, he was playing with our daughter Michaela on her bed and she was laughing.

Andrew was gurgling happily as I got him ready for his first family swimming session. Then Michaela screamed, and when I looked, Chris was blue and having a massive fit. I rang an ambulance and tried to revive him. By the time he got to hospital, he was pronounced dead.

In the blink of an eye, our lives had been turned upside down. It was a freak tragedy - my husband wasn't epileptic.

Outside, people were going about their everyday lives. But for me life had stopped. For the first few years after Chris's death, I was grief-stricken. I still loved Chris - we hadn't divorced or fallen out of love.

As time went on, I felt I would be ready for a new relationship, but I discovered it wasn't that easy. Finding the time to socialise when you have small children is hard. Many of the men I met were either very young bachelor types and not paternal, or much older men.

I felt early on I could only introduce someone to my children who was going to be special. I go out and hope I will meet someone else. I have not given up on love.

EIGHTEEN MONTHS: LULU PHILIPS,
39, is a divorced single mother, who lives in a two-bedroom flat in north London with her two sons, Ben, 11, and Joshua, aged three. She says:

I haven't slept with anyone for around 18 months. I've gone through periods of celibacy throughout my adult life - the longest lasting five years. That was after the break-up of my marriage nine years ago.

I was devastated at the end of our eight-year relationship and lost all my sexual confidence. My body just closed down and I later discovered that it was a condition called vaginitis, which made me impenetrable.

For the last year of our marriage we hadn't been having sex. I thought it was because my husband was a workaholic, and resigned myself to a sexless marriage, thinking that I had more than enough in my beautiful baby boy.

But it turned out my husband was seeing another woman, and that's why I wasn't in demand in the bedroom.

I believe the medical condition which made sex too painful to contemplate was purely my mind protecting me from more hurt.

There was nothing physically wrong with me, but there might as well have been. A year or so after my husband left me for the other woman, I became deeply obsessed with an actor and was absolutely thrilled when he took me to bed.

I was so embarrassed when nothing was able to happen that I ran out of his house and down the street crying all the way.

After five years of undesired celibacy, the turning point came when I went on a girls-only holiday to Morocco and started flirting with the man who was teaching us to ride Arab stallions.

He was very attracted to me and arranged for me to have a wonderfully romantic night with him in a Bedouin tent in the desert. But at the last minute I pulled out - I just didn't dare risk dismal failure.

My friends laughed at me and said I was ridiculous becoming a born-again virgin at my age. That made me determined to get back into the saddle, so to speak.

So on my return to London, I threw a party and invited five men to it. I decided the first one to make a move on me would be spending the night with me.

It worked, and I was deeply relieved. Not long afterwards I met Joshua's father, and we had a very loving relationship for four years, which produced our beautiful son.

Although we still see each other occasionally, we haven't made love for 18 months, and our relationship has broken down. I'm continually wiped out looking after two children on very little money. I've put on a lot of weight and feel depressed about anybody seeing me naked.

My confidence is at an all-time low. If I could slim and have plastic surgery I might feel differently, but that's a fantasy. Until then, life is less complicated without sex.

THREE YEARS: JEMMA WATKINS,
27, works as a PR account executive, is single and lives in Bristol. She says:

I've happily gone without sex for almost three years. People tend to reel in horror when I tell them that, but in fact I've found it the most liberating period of my life.

I've made more friends in the past three years than at any other time in my life, because I've had so much more time and energy. People are so obsessed with sex now they forget about the importance of real, deep platonic friendship.

I have never been one for casual sex. I think many women "offer" themselves as a way of trying to make men fall in love with them, and it just doesn't work.

I personally find it very hard to separate sex from love, and I would not want to. I read English at Bristol University, and after I graduated I moved into a shared house with four guys.

I was celibate for all of the time I lived there, and it was great - I had the male companionship, as if they were surrogate boyfriends, without sex.

It may sound surprising, but a lot of my friends are celibate too. The image is that people of my age are having masses of sex, but a lot of men and women find casual sex a real turn-off. It should be part of a deep, loving relationship, and it adds a great deal.