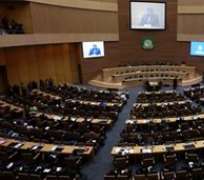 China has built a new headquarters for the African Union

A vote to choose a new chairman for the secretariat of the African Union has ended in deadlock – despite three rounds of voting.

The vote has now been deferred until the next AU summit in Malawi in July.

A BBC correspondent says Mr Ping will now remain in office until then.

Earlier reports had stated that deputy chairman Erastus Mwencha of Kenya would take over the post until fresh elections.

Mrs Zuma, the former wife of President Jacob Zuma and one of South Africa's longest-serving government ministers, was challenging to become the first woman to head the 54-nation bloc's executive council.

Mr Ping, who has been the chairman of the African Union Commission since 2008, was running for a second term.

The BBC's Noel Mwakugu in Addis Ababa says Mr Ping was challenged after coming under immense criticism from African leaders for the way in which he responded to the Libyan crisis.

Our correspondent says there are behind-the-scene mutterings that Mr Ping was not fully behind an African Union ceasefire plan and the mediation mission led by President Zuma of South Africa.

Both Nato and Libya's then rebels rejected the AU plan, on the grounds it did not call on Mr Gaddafi to step down.

It is the first summit since the death of Libya's Colonel Gaddafi, who played a key role in the formation of the African Union.

Delegates are meeting over the next two days in the new $200m (£127m) AU headquarters, funded and built by China, which was officially opened on Saturday.