AL-MUSTAPHA TO DIE BY HANGING 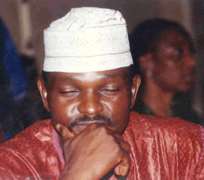 Al-Mustapha
Former Chief Security Officer (CSO) to the late Head of State, Gen.Sani Abacha, Major Hamzat Al-Mustapha and former protocol officer to MKO Abiola, Lateef Shofolahan, have been sentenced to death by hanging by a Lagos High Court sitting in Igbosere after 12 years of trial for the June 4, 1996 murder of Alhaja Kudirat Abiola, wife of Chief MKO Abiola.

The trial judge, Justice Mojisola Dada handed down the verdict after comprehensively reviewing the evidence adduced by both parties which lasted for seven hours and convicted them of conspiracy and murder in accordance with the provisions of Section 219 of the Criminal Code of the Laws of Lagos State.

'The evidence of the prosecution is manifestly reliable and has established all the ingredients in this case. The crime of murder under section 219 of the Criminal Code Law of Lagos State is punishable with death by hanging.

'The first defendant magnified himself and his office that he felt nobody could touch him,' the court said.

Justice Dada punctured the case of the defence as canvassed by their lead counsel, Olalekan Ojo, which was predicated on the latter recanting of the earlier testimonies of the star witnesses: Barnabas Jabila (aka Sergeant Rogers) and Mohammed Abdul (aka Katako).

Delivering its judgment, the court held that recanting of an earlier testimony by a witness does not cancel the earlier statements made by the witness.

Specifically, the court pointed out that the statements made by the witnesses during the investigation of the matter by the Special investigation Panel (SIP) in 1999 were not negated by their latter recant.

In that statement, they had stated that Jabila was sent by Al-Mustapha to kill Mrs. Abiola and that Katako was the driver of the car used in the drive-by shooting.

They had also stated that Al-Mustapha's co-accused, Lateef Shofolahan, was their informant on the movements of the deceased, contrary to the evidence of Shofolahan that he met Al-Mustapha during a two million man march for Abacha held at Eagles Square, Abuja in 1998 and the former CSO's claim that he met Shofolahan at the SIP.

Thus, the court established the link between the two defendants through the voluntary statements of the witnesses that Shofolahan had been an acquaintance of Al-Mustapha as he used to visit him in Aso Rock. In fact, the court noted that on June 3, 1996 a day before the murder, Jabila had confessed that he met with Shofolahan at the National Theatre in Lagos to finalise preparations for the murder.

Later, the two witnesses while being cross examined by the defence counsel said the earlier statements were false and that they were made to make those statements by some authorities in government as at 1999.

However, the court held that the demeanour of the witnesses while they were recanting during cross-examination by defence counsel shows that they were saying what the defence wanted them to say.

Consequently, the court held that the prosecution has been able to prove the two-count charge of conspiracy to murder and murder sufficiently.

Justice Dada held that though the defendants had been discharged in a similar case before a sister court after the recanting by the same witnesses, it was not enough not to convict them.

She also pointed out that the evidence of Sergeant Rogers was cogent and reliable 'when he described how Abiola was killed and he said 'We get am!' shows that it was not a product of coaching.'

On the attitude of the second defendant while opening his defence before the court, the court noted that Shofolahan put up a theatric show to deceive the court when he was crying in court to hide his guilt.

'The second defendant wanted to be relevant no matter whose ox was gored. It was his greed that took him to such acts. He participated actively in the two million man march while MKO Abiola was still in detention and he was his protocol officer. This traitor gratuitously found his way into the presidency. He tried to turn the case into a huge joke by his theatrics in court thinking it would be carried away by his acting,' the court held.

According to the court, the prosecution has been able to give sufficient reliable evidence to prove the case against the defendants.

However, the defence apparently dissatisfied with the outcome of the trial dropped the hint that the verdict would be contested before the appellate court as they are poised to challenge the death sentence passed on the two defendants by the trial court. Lead defence counsel, Olalekan Ojo, in his swift reaction to the judgment prayed the court to avail them of a copy of the judgment so that they can prepare their brief on the appeal on time.

'We are praying the court to avail us of a copy of the judgment so that we can expedite the appeal before the three wise men. We shall certainly test this judgment before the Court of Appeal.'

There was unusual heavy presence of security around the premises of the court as the entire area and the adjourning streets were cordoned off by stern looking security operatives armed to the teeth as early as 7.00am. Both gates leading into the court were manned by security operatives and fierce looking police dogs. Both passers -by and members of the public who wanted to enter the court premises were thoroughly screened by the heavily armed combined operatives of the prison guards, Lagos state special anti- crime force, the Rapid Response Squad (RRS) and the State Security Service (SSS).

The security remained tight until 5pm when the court finished delivering its judgment. As the news of the conviction and death sentence passed on the duo of Mustapha and Shofolahan, there was dramatic movement of people trying to get out of the court premises apparently for fear of possible riot from the defendants' supporters who had gathered en masse in the court premises as early as 7.00am in solidarity for them.

The security, however, remained calm until the convicts were driven out of court with heavy security details.