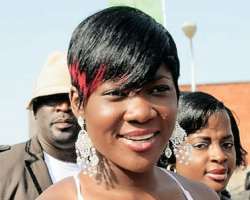 There's music in the air, as I write - just like there was music in the year, from January to December. There's a movie playing in my head - memories of images from Jenifa, and Figurine and 2010 and many more clips that ruled the year.

My head is breathing and banging and thrumming; almost overwhelmed by all that went down this year: the good, the bad, and the absolutely unpalatable. The past 12 months have been engaging and exciting; filled with a mixture of fun, fabulous moments, and periods of havoc and hazards.

And it's all happened fast - so fast, even Usain Bolt would have had a difficult time keeping up with the pace. From Nayo's surprise retirement, to Lord of Ajasa's secret wedding, the confusion at PMAN, Dan Foster's alleged deportation and the messy divorce war between Alec and Kefee, the year kicked off with drama and more drama.

2009 will be remembered as the year Kemistry went to war with Inspiration FM, the year 9ice built his first home, Soul E parted ways with Ure Okezie, and Timaya got into a messy fight with his lover, Empress Njamah.

Although it was released last year, Funke Akindele's Jenifa will easily pass as the most popular movie this year, influencing our general lingo, and winning a new kind of attention for Nollywood movies. Jenifa defied the theory of the critics, throwing up that question for the umpteenth time: “What and who really determines a good movie?'' what Jenifa lacked in story and cinematography, The Figurine, Through the Glass, Guilty Pleasures and a few others seemed to bring in excess. And, if there were ever any doubts whether there'll be space for Nollywood in the re-emerging cinema arena, the screening of The Figurine, Through the Glass and Guilty Pleasures should erase all such doubts permanently.

If we ignore all the intrigues playing out at AGN (the Actors' Guild), and the many lack-lustre movies still finding their way out of the industry, and focus on the few actors, directors, producers and enthusiasts determined to do things right, then it can be said that in 2009, Nollywood moved far away from a quantity-driven system, and stepped closer to an environment where quality is key.

Sadly, the same cannot be said of the music scene. The musicians' union remains in coma, and piracy still reigns supreme. And, while the artistes earned big bucks all year, and amassed major awards like they're going out of fashion, the industry remained in chaos, with labels broke, broken and battered, and the quality of music castrated, cheapened and compromised.

To the casual observer, it would look like 2009 was a good year for the music industry in Nigeria. Far from it! It was a good year for a few artistes, no doubt. But it was a bad year for music business and allied industries — no thanks to unhindered intellectual property theft (including bootlegging, illegal internet file sharing and downloads), poor rights administration, lack of effective distribution network, continued flight of valuable professionals, poor CD pricing, poor quality control and monitoring system, and terribly poor funding.

The Nigerian music 'industry' generated revenue running into billions in 2009; most of it coming from sponsorships, endorsements and performance fees - a dangerous trend, considering that the industry's primary products are audio and video CDs. Corporate dominance renders the industry vulnerable, and susceptible to manipulation and misdirection. And a change in policy by the big spenders could mean disaster for an over-reliant music sector.

Okay, stop fretting. There's some cause to smile: a distribution system — an alternative to Alaba — is gradually emerging, thanks to Soforte Entertainment and other stakeholders; the newly-formed Copyright society of Nigeria (COSON) is poised to make some difference; and the successes recorded by the likes of Femi Kuti, Darey Art Alade, Etcetera, MI, Bracket and Asa showed there's still some hope for serious, sensible sounds..

There's hope too, for the fashion industry. Young, gifted designers are setting up practice, while more and more beautiful young men and women are ignoring the call of blue-collar jobs and heading for the runway and photo studios. From South Africa to Milan and New York, Nigerian models, tailors and designers raised the green-white-green high, performing wonders with African fabrics, and contemplating a fresh path for the global fashion industry. But, as the controversies surrounding The Next Top Model have shown, the fashion industry too appears soiled with dirt, plagued by disorder and decaying in the absence of an effective watchdog. The most promising models are fleeing to South Africa and the US, while young designers are getting choked by the burden of competing with established foreign labels - which still find their way here en masse, in spite of government regulations.

On TV this year, the regulations proved to be a gift and a curse. Most Channels pushed up their local content, in obedience to NBC's 70:30 command. But most of the home-made programmes were nothing to write home about. The music shows all followed one pattern: either video rotation, or graphic news and voice overs. Apart from Celebrity Takes 2 (which is still on-going), same can be said for the reality-interactive TV shows that ruled the year: poorly adapted foreign concepts, poor execution. And it's not all the producers' faults - in a country where TV stations are shying away from developing or commissioning content; where independent producers who do have to part with an arm and a leg to get the programmes aired continuously, chances that we'll get palatable results are slim; very slim.

Unlike TV, there's some exciting stuff going on on radio. A fresh set of DJs and presenters are giving audiences what they want, and expectedly, listenership is soaring. Dozens of new stations kicked off all over the country this year (including Beat, Smooth, Classic etc), and many more are right now setting up, getting ready to go live. In a country where most of the major cities are plagued by traffic, rush-hour radio shows are making life easier; giving many something to fix their minds on, while they wade through the traffic. But, in terms of content and direction, majority of our FM stations are still heavily 'Americanised'. Most of the presenters either have accents or fake it, the entertainment news is filled with mostly Hollywood info, and the music, when not Rihanna and Jay Z and Beyonce, is from Nigerian acts who sound like (or want to sound like) them. In Lagos for example, apart from Wazobia, Eko FM and 107.5, most of the stations still do not include Fuji, Juju, Highlife or Afrobeat in their day-to-day playlist. If it's not pop music, then it's not flying! In fact, even if it's pop, and it's not fast enough, then no way! And because radio is powerful, the resultant effect is that majority of the acts coming out are now embracing pop music - even the established ones are looking for up tempo bubble gum sounds, to increase their chances of getting radio airplay.

And, because the librarians don't properly screen the music, and NBC is, most of the times, asleep, a lot of cuts that should have been labelled NTBB found their way to radio from January to December. You could be riding in the car with your kids around noon, and tune on the radio, only to be confronted by a raw, vulgar, or violent song coming from the speakers. Artistes no longer care about radio edits, the stations don't insist on it, and before the NBC notices what's happening and forces a ban, the songs would have already been on the air for months.

The entertainment Media (print and online) is more driven by local content; and practitioners less tolerant to entertainers' misdemeanours. But, while celebrity reporters and journalists are up and running, feeding fans with gossip, news and features from a personal, human interest perspective, art reporters appear to be on vacation — leaving actors, directors, musicians and artists to wander and stray — In the absence of regular, well-thought reviews, critiques, analyses and agenda setting.

It was the online community (through iTunes, Amazon, notjustok.com, bellanaija.com, thenetng.com, mytruspot.com, nigerianhiphop.net, youtube.com and others) that emerged the biggest surprise of the year. Well- designed and well-written, the blogs and journals are giving audiences what they want, and they're responding with love and attention. Who would have thought a day would come when artistes released their songs (and even albums) first on the internet before taking them to radio and physical stores? Nigeria still has a long way to go in terms of information technology and use of the World Wide Web. But the entertainment industry realised the power of the online tool this year - and we give them thumbs up for exploiting it in ways many would have thought impossible - well, including having Facebook video premieres and adopting the micro blogging service Twitter as an efficient PR tool...

In all, 2009 was not a terrible, wasted year. But it was not a fantastic year - sadly so, because when we said 'Happy new year' on January 1, we had an opportunity to spend the year the way we wanted to; we had a choice - to either reap the full benefits and move the industry forward in every ways possible, or to continue the chaos we call an industry.

We had a good chance. But we didn't completely squander it - there's still hope, as our 2010 preview will show, next Friday...