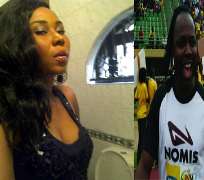 As Air hostess lover moves in with him

According to those who should know, Victor's new love is Temitayo Ade, an air hostess with Chanchangi Airline. Pretty and very light skinned, she is in her late 20s and she formerly works with the defunct Virgin Nigeria.

An Abeokuta indigene, she resides at Ogba in Lagos with her family and drives a navy Blue Toyota Avalon car. Those who are close to the beautiful lady informed us that she has benefited immensely from the affair.

Though unconfirmed, insiders alleged that it was the footballer and widower that bought her the car. Also, they said the ex-footballer pampers her so much with cash and attention.

And if what one of the friends of Temitayo told Top News is anything to go by, then the latest love birds may tie the knot before April 2012.
According to those who know their love story well, their paths crossed during one of Victor's trips to Abuja, they met aboard Virgin Nigeria Airline; Temitayo former company.

Though, Ikpeba, a regular visitor of the Nightshift Coliseum at Opebi has been linked with so many ladies after he lost his wife, Atinuke; mother of his children (Magdalene and Christina), he also has a woman in France that had two beautiful young girls for him but he seems to have been struck by the cupid's arrow of Temitayo.

For now, they have been enjoying a whirlwind romance. Infact, insiders alleged that Temitayo has moved in with him and they're now living under the same roof at Gbemisola Street in Ikeja where Victor has his house. The only thing left is to formalize their union, a source said.

Victor also visits her home in Ogba and he has been known by people in the community, that he has a link with the lady's family especially Temitayo's mum who has been praying fervently that the widower should tie the nuptial knot with her only daughter this year. And from the way they are carrying on with their romance lately, the wedding bells may soon toll for them.

Victor Nosakhare Ikpeba, once fondly known and addressed as the Prince of Monaco because of his exploits in that part of the world, was married to Atinuke whom he later lost to the cold hands of death. She was diagnosed of cancer.

Insiders alleged that the former Monaco FC, Borussia Dortmund of Germany, Julius Berger of Nigeria player is considering marriage again while Temitayo Ade, who is well known in the circle of some big boys in that past, can't wait to settle down.