NIGERIAN GOVERNORS FORUM AND THEIR GREEK GIFT OF BOKO HARAM 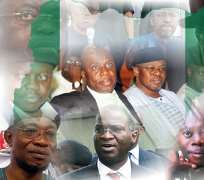 I will use this piece to conclude on the series on Boko Haram and how the issues could be resolved from multifaceted angles. A preview of the earlier piece will help to situate on how the Nigerian Governor forum comes in. The first piece, ‘Buhari,Jonathan and Boko Haram’ concludes that the Federal Government can solicit the assistance of General Buhari, former Head of State and major opponent in the just concluded presidential elections, in the fight against Boko Haram, since he is the most popular politician in the north.

The second piece, ‘Nigerian Politicians, Thuggery and Boko Haram’ condenses that the Federal Government should ban the sponsor of thuggery groups by Nigerian politicians especially state governors, to prevent the rise of another group teaming up with Boko Haram to swallow Nigeria.

The third piece, ‘Ojukwu was Right; Boko Haram’ explains that the wanton bombings, killings and demands of the Boko Haram sect justifies the reason the Biafran leader wanted to seccede from Nigeria in 1967 and as such the late Odumegwu Ojukwu deserves an unreserved apology.

The fourth piece,‘ Boko Haram Republic; Why Not?’ summarises that instead of senseless killings to continue leading to a civil war the core north could have a Boko Haram Republic if empirical evidence like a referendum proves that majority of people in the core-north prefers the option.

The fifth piece,‘ Boko Haram, Security Budget and Security Contractors’ informs that the actions of Boko Haram infiltrators in the highest echelon of Nigerian security system provides constant leakage of sensitive information . Equally the activities of security contractors scrambling to share the huge security votes and budgets constitutes a distraction to the effective discharge of responsibilities towards containing the insurgency.

Concluding these series on Boko Haram it is pertinent to remind Nigerians that the greatest cabal in the country is the Nigerian Governors Forum. This cabal consists of 36 state governors of the Nigerian states. They are mostly of the ruling party but when it comes to shortchanging the Nigerian people they unite into a brotherhood. They never criticize one another even when they know that their member committed atrocities, in fact they always unite to defend the indefensibles of their colleagues. The Nigerian Governors Forum introduced the idea of fuel subsidy removal to President Goodluck as precondition to paying $120 dollar per month minimum wage to Nigerian workers.The President being a former governor in Bayelsa State , aligned with the views of the brotherhood.

This Boko Haram terrorism was their creation. The Governors pastime was arming unemployed youth with sophisticated weapons , training them and unleashing them on the nigerian polity. They supported thuggery with impunity and spent the ever increasing security votes on political thugs who at the end of their service use the excess arms to commit robbery, kidnappings, and terrorism as the Boko Haram sect is doing now. It surmises that the truck load of amunitions bound for Nigeria that was impounded by the vigilant Ghanaian security forces in January 2012 must have been ordered by one of them. Each time we hear that arms have been seized by Nigerian security agencies the case will die naturally because the importers have constitutional immunity.

The Borno State thuggery experience backfired on the nation and thousands have died because a State Chief Executive left his constiutional duty to patronise private army. President Goodluck will be the biggest fool if he elects to clean this Boko Haram mess alone. If President Goodluck generated the will to send troops to Lagos State to occupy and harass protesters of fuel subsidy withdrawal he should equally generate another will to seize the security votes of members of the Nigerian Governors Forum and use it to augment the ones mapped out for the war against terror.A percentage of their unaccountable share of the federation account should equally be deducted at source to fund the fight against terror. This will drive home the point that any state that sponsors terror groups will pay dearly for it. Imposition of state of emergency in any state where the security situation collapses is very necessary.

Until President Goodluck takes stern measures against his brotherhood who defecated Boko Haram terrorism and fuel subsidy removal on the transformation fresh air he promised Nigerians , he will be imperiling his already scandalized presidency. They should be made to share drastically the cost of fighting the Boko Haram insurgency. The Nigerian Governors Forum have given us enough Greek Gift, at least let them carry back this Boko Haram gift they gave us and the associated negative image on the Nigerian State.