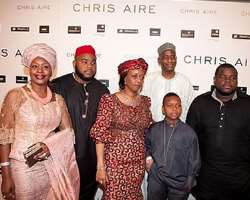 SAN FRANCISCO, January 20, (THEWILL) – Ugonna Alison-Madueke has reacted to his photographs posted on multiple online mediums, blaming mischief-makers for misrepresentation of facts, adding that the move was aimed at embarrassing the Alison-Madueke family to score cheap political points.

Ugonna is the stepson of Mrs. Diezani Alison-Madueke, Nigeria’s Petroleum Minister who been at the receiving end of major oil-marketers lately.

Though Ugonna declined to speak to THEWILL correspondent, he however emailed a statement to address what he called a plot by the “devils in our midst to rubbish our family’s name.”

The statement reads:
Re: A WICKED ATTACK ON MY PERSON VIA INTERNET PHOTOGRAPHS: OFFICIAL RESPONSE OF UGONNA MADUEKE, SON OF MRS DIEZANI ALISON-MADUEKE

It was with great dismay that I awoke a few days ago to see the pictorial publications being circulated about my family and me by the on-line media. It has stirred up a great deal of controversy and has portrayed our family in a negative light.


The pictures posted were taken over a period of time, some before my mother left the private sector as an ED at Shell to work for the Nigerian government. Although I benefited from a comfortable upbringing I was raised in a fairly strict environment by a military father who insisted that we worked to support ourselves whilst in school. He ensured that we had the basic minimum to support us covering tuition food and transport only.

We were all compelled to work to support ourselves and at the same time excel academically. I am a fully qualified engineer who has worked in my area of expertise for the last 2 and half years. I work very hard at my job and like many people across the globe I also party hard.


The pictures of my brother with Neyo and Dbanj are typical of the way any young man or woman will react getting somewhat excited when they run into stars whether they be home grown or international. Most people will be more than happy to have their photograph taken with them.


As far as the limo ride goes, they are commonly used as airport taxis overseas. Occasionally myself along with my friends and family chip in to pay approx $100 from the airport to our destination. To put this in context it is approximately N16, 500. There were 6 of us in the limo ride, which worked out to be roughly N2000 per head.


With regards to the picture of me in the airplane, which by the way was shot almost 2 years ago, the explanation is really quite simple. I was in America to attend the wedding of an old classmate whose parents had chartered a small aircraft to take some of the bride's closest friends and family to the destination. I did what anyone in my shoes would do and took a picture, Facebook is a testament to that.


It has been alleged that my family flew to America to attend a party, The event we attended was the Chris Aire event for the unveiling of NIGERIA’S GEM STONES with my Mother in her capacity as the then Minister of Mines & Steel. It was an event designed to promote Nigerian Gem stones.

The picture of us on the Red Carpet as we attended the event has also being published. I struggle to fully understand how something that was intended to showcase Nigerian talent and products is now seen as wrong. She also honoured an invitation at the London Stock Exchange to make a presentation; a clear indication that the Gemstone event at Los Angeles had started attracting foreign investors.


The picture showing members of my university fraternity and I holding some money was taken several years ago, while I was an undergraduate. It was a requirement of the society that we documented our fund raising success for a charitable course on behalf of the society I belonged to in the university. The society is called Alpha – Phi – Alpha University of Maryland Chapter.


Like any young man, I have had my fair share of fun, hanging out and partying I am grateful for the upbringing that I have had. This does not however mean I am immune from the realities of the plight of millions of Nigerians living at or below the poverty line. If the pictures (published out of context) were intended to portray me or my family as insensitive to the plight of millions of Nigerians I can honestly state that this is by no means who we are.


What this has taught me however is that, with positions of privilege and leadership come humility and responsibility not only by those in leadership but members of their extended family also.


I sincerely apologise to my family and the Nigerian public for any hurt, anger or embarrassment that might have been caused by these pictures, which were taken completely out of context. I will endeavor to ensure that all my actions in future will be sensitive to the plight of all.


However I have absolutely no control over this well orchestrated smear campaign, which is mainly directed at my mother, I therefore appeal to Nigerians not to take everything they see or read at face value.