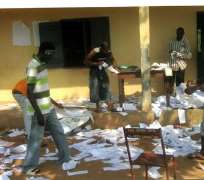 The recent upsurge in the activities of the Jam’atu Ahlis Sunna Ladda’awati wal-Jihad, a.k.a. Boko Haram have elicited a lot of provocative views across the nation. People erroneously accuse all Muslims of complicity in the activities of the sect without knowing that the factor that led to the emergence of the sect is right in their own backyard. There is no doubt that the remote cause of the Boko Haram’s uprising has to do with ignorance, illiteracy, poverty and the misuse of the privileges of western education by some elites in the north to impoverish their muslim brothers. However , this impoverishment has been tolerated for almost fifty years of Nigerian Independence until something recently triggered the reaction.

The recent crisis was triggered by the usual use and dump manipulative tendencies of State Governors. The then Governor of Borno State Senator Ali Modu Sheriff recruited some members of the sect hitherto practicing their faith in relative peace , armed them and mobilized them as thugs to help him win re-election. The sect was promised a lot of spoils if the Governor is returned. Bouyed by the promise they unleashed mayhem on political opponents of the Governor and helped secure victory for Sheriff. The Governor just like his colleagues all over the country reneged on the promises to include them in power sharing.

They were actually treated like lepers when the spoils of office was being distributed. The sect members saw those who did nothing to help retain the status quo now buying lands, building mansions, travelling for holidays abroad and cruising in the latest automobile while they were left to start life afresh. Of course, they reached the irrevocable conclusion that people who claim to have gone to school are all deceivers , thieves, looters , and betrayers. They then decided to fight western education vehemently and with the use of force.

Their campaign gained notoriety because they have excess arms in their possession obviously purchased with state funds. After successful rigging and thuggery operations no effort was made to retrieve the arms from the sect. With excess and idle munitions in the armoury the sect started a series of local attacks until fifth columnists infiltrated their ranks, gave them sophisticated trainings , fundings and intelligence. Other State Governors did the same in their respective states. Odili sponsored cults in Rivers state, Chimaroke had killer squad in Enugu State that put the fear of hell into people, Mbadinuju’s Bakassi killed the NBA chairman and wife in Anambra state—the public reaction against it cost him the next elections. Yuguda has his own which he used against opponents in Bauchi State even in the recent past election,Alao Akala used NURTW touts he inherited from Adedibu against opponents. Ibori in delta and Alameisigha in Bayelsa all sponsored cults for electoral purposes. This use of thugs is the vogue among state governors , the only difference between them and Borno State is that either their leaders were personally settled at the expense of their followers or they were intimidated and blackmailed into submission by security agencies of the various states.

The use of armed intimidation against political opponents, the sponsor of various armed thuggery groups and the use of state armed apparatus to give them cover should be banned by the Federal Government . This kind of illegality that birthed Boko Haram exists all over the states. Governors sponsors thuggery group against political opponents , firearms are distributed indiscriminately and at the end of the day these arms are not accounted for. The people in possession of the arms turns to militants, insurgents, armed robbers, kidnappers, hired assassins . ritualists and other vices associated with force. It was after the 2003 elections that arms flowed towards Kogi axis and Lokoja –Okene road became a nightmare to night travellers till date due to constant daily armed robbery. After 2007 elections Argungu- Birnin Kebbi road in Kebbi state, Talata Mafara axis in Zamfara and Okigwe- Aba road in Abia State , Ajaokuta-Anyangba-Otukpa roadin Kogi/ Benue among others became danger zones even in broad daylight due to dare-devil robberies.

The Boko Haram leader could have turned his gang to armed robbers and hired assassins but he chose to give his group an ideological identification which definitely grew out of proportion when infiltrators and fifth columnists joined the rank. Governors of other states are as guilty as ALI Modu Sheriff in sponsoring armed gangs .The only difference is that the Borno own had a strange and dangerous twists.

President Jonathan should as a matter of urgency, policy and security stop state governors , ministers, senators and politicians all over the country in PDP, , CPC,CAN,APGA, ANPP or any other party from sponsoring any form of thuggery. This is to prevent the rise of another group which if they team up with Boko Haram can swallow Nigeria.

*** Obinna Akukwe is an Financial / IT Consultant.