ECLIPSE OF POLITICAL CHASTITY IN NIGER 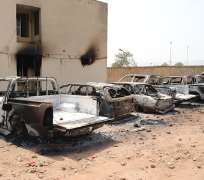 Politics in Nigeria is gradually taking a ridiculous back turn especially in the area of oppositions devising devious means to fight government in power. Last Thursdays dimension of peaceful protest organised by labour turned out bad as youths sponsored by political profiteers invaded state and federal institutions in Minna, Niger state.

In recent times especially after the 2011 April general elections, Niger state has turned out to be a political theatre where oppositions engage in the trade of tipping the scale of peace and harmony. Youths ranging from age ten and above are marionette to unleash havoc on government properties.

Last Thursday, masterminds of the civil unrest which led to the burning of the Independent national Election (INEC) building and field vehicles, the Popular Tanko Beji House, the Investment building, the state Revenue Board did not hide their identity as they went straight for the citadels that holds the political structure they so loath.

The ugly trend of attacking institutions seems to have come to stay in Niger state since the April election fall out. Now each time there are issues within the state or national, law abiding residence of the state become apprehensive as they are sure miscreants will take up arms to do the biding of their dark hearted masters.

Aside other empirical indicators pointing at political profiteers in the last Thursday attack, the trend of events in the last six months indicates that table tippers are on the prowl to make the state chaotic and ungovernable for the incumbent Governor, Dr Muazu Babangida Aliyu.

For the teenagers used in the dastardly acts, they are oblivious of the resultant consequence to their future. They are not aware that they are using their own hands to retard the development of the state as their actions only forces the government to spend money in fixing structures instead of building more.

As a result of their naive minds, the brains behind these attacks prey on them to achieve their mischievous intentions. Haven failed in all their efforts targeted at bringing the Chief Servant Dr Aliyu to disrepute, they have resulted to violence with apparent intention to grind the mills of government to a halt.

While those behind the recent trend of unrest in Niger state are having filled day in engineering destruction of public properties running in millions of naira in worth, they should be warned that they are testing the might of government and are also propagating the doctrine of violence in the psyche of their young and gullible helpers.

Sadly, after the attacks on public structures, these mischief makers cashing upon the impact the destructive acts left on the minds of people living in Minna Township authored text messages suggesting impending religious war. The messages were well peddled in line with the intension of the perpetrators but the timely intervention of the military, the situation certainly would have spiralled out of control.

One can certainly imagine the disastrous consequence of what the outcome of events would have been if only the intentions of the sore minded villains behind the civil unrest were operational. Once again, God worked with the swift intervention of the Governor saved lives and properties which would have wasted for nothing.

A good look at the way and manner the Chief Servant operates throws more illumination on the way and manner leaders should act when presented with imminent danger. Thanks to his visionary thinking, curfew was imposed immediately and security operatives detailed to keep vigil of situation.

Now the intention of enemies of Niger state and Nigerian nation have failed once again. The duty of security consciousness should be passed to the people as a matter of utmost priority since those fuelling trouble in the state reside within the people. The state government haven promised the people the best of governance will not renege but it must be allowed to work.

Haven introduced policies that are not only people oriented but have over the past five years brought succour to the citizenry. It is therefore best for the people to reciprocate by working with the government as partners in continuing the good work.

Parents and guardians should not allow their children and wards to take up weapons against institutions or law abiding members of the public. The result of such criminal negligence on the part of parents will only bring total state of disorderliness which may even claim the lives of their loved ones caught by nemesis while in the act.

Oppositions should sheath swords and be more constructive in their approach towards the incumbent. Their negative action will only stampede the progress of the state. Many Nigerians have realised that Governor Aliyu is coming under attacks for no just cause by people who are seeking to douse his political will for the people of Niger and the country as a whole.

Despite the desperate attempt by detractors to smear his reputation, Aliyu has vowed to continue on the path of ensuring that the people benefit from the dividends of democracy. He swore to protect the lives and properties of the people while assuming power as governor and that he will continue to do.