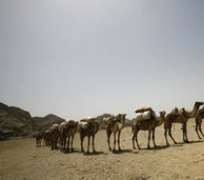 At least four people have been kidnapped and five foreign tourists killed in an attack near the Eritrean border, the Ethiopian government says.

Two German tourists and an Ethiopian policeman and driver were then abducted, he said.

Eritrea has denied the accusation by Ethiopia that it was behind the attack.

The tourists are believed to have been visiting a volcanic region in Afar – which correspondents describe as extremely hot and inhospitable – when they were attacked late on Monday.

Banditry is common in the area where both Eritrean and Ethiopian separatist rebels have operated.

Two Germans, two Hungarians and an Austrian were killed in the attack, according to Mr Bereket, the Ethiopian government spokesman.

Two others were seriously hurt and a third is said to have escaped the attack unharmed, Ethiopian Television (ETV) reported.

The two injured tourists – both believed to be Belgian – had been taken to a clinic by the military, it said.

'Taken over border'
The four people kidnapped were taken over the border to Eritrea, Mr Bereket said.

He blamed the attack on gunmen who he said were “trained and armed by the Eritrean government”.

“It is the usual terrorist activity by the regime,” he told Reuters news agency.

But such allegations were an “absolute lie”, Eritrea's ambassador to the African Union, Girma Asmerom, told Associated Press news agency.

Eritrea gained independence from Ethiopia in 1993 but the two countries soon became embroiled in border disputes.

In 2007, five Europeans and 13 Ethiopians were kidnapped in Afar. Ethiopia accused Eritrea of being behind that kidnapping, though Eritrea blamed Ethiopian rebels.

The hostages were all eventually released.
There is a danger that this incident could further fuel the animosity between two nations that are already bitter enemies, says the BBC's East Africa correspondent Will Ross.

Ethiopia says it will try to free those who were abducted and to secure the border.