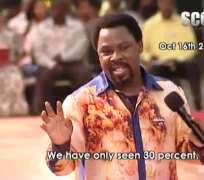 In our Last post we made a statement openly soliciting for what TB Joshua's critics, who think His prophecies always involve simple binary outcomes, had to say on the uncanny precision of TB Joshua's prophecy of the world economic depression and particularly, the Nigerian protests, quite surprisingly (because of their long-term morbidity), we got our response on a reputed scoan critic site, and guess what? It turns out that they no longer believe His prophecies ALWAYS involve simple binary outcomes, but they now believe it to involve “News reading”. Clearly ruled by dubious inconsistencies, they quickly reverted to the “News option” when it became clear that the “simple binary outcome allegation” was a lie, let's take a look at their fresh opinion in their new post which they backdated by two days (I know because I subscribed to their blog and got an alert of the new post on the 16th but its dated 14th on their blog) alleging TB Joshua's prophecy to be a function of News reading: According to these TB Joshua Critics,

His prophecy was delivered on the 16th of October 2011, and On the 15th of October 2011, Reuters reported that tens of thousands of demonstrators staged rallies in hundreds of cities around the world, including Auckland, Sydney, Hong Kong, Taipei, Tokyo, São Paulo, Paris, Madrid, Berlin, Hamburg, Leipzig, and many other cities.

They summed up their criticism by saying:
SCOAN have recently released and widely publicised a video claiming that TB Joshua predicted the worldwide protests we are currently witnessing. Sorry TB Joshua, while your advice is good, the prediction of worldwide protests doesn't count as prophecy, it's just news reading.

Now they're sounding totally absurd, illogical and highly disappointing, they cunningly turn the prophecy to an issue of “protests' and not the “economic depression” which TB Joshua really emphasized. TB Joshua never said world-wide protests were Just starting on October 16th 2011, Neither was the official video SCOAN released tagged TB Joshua predicts the world-wide protests; it was tagged: Economic depression Prophecy 2012, In other words He was only speaking further on the economic depression he prophesied back in 2008, but then added that at that time, (October 16, 2011) the world had only seen 30% of the crisis, leaving a whopping 70% yet to be experienced.

Meaning he well acknowledged in the October 16 prophecy that the crisis had begun, yet emphasized that we have not seen anything yet, He was clearly speaking of the scale of the problem ahead which no News report can give for certain, the News media only report the happenings in the present. I guess these critics should take another look at that video now cos it seems their cynicism is blinding them to obvious facts.

The choice of TB Joshua's prophecies they use to attack his prophetic prowess is highly selective for a start, why don't they take on the Nigerian Bombings predicted two years ago or the 2011 Nigerian election postponement prophecy? Why didn't they use these as a standard to measure against? That alone raises a red-flag that there's some sort of catch to their so-called expose's on TB Joshua.

Notwithstanding, in 2008, the prophet did make it clear that his prediction of the economic depression was a long-term prophecy, not immediate. And at that time of making the Prophecy of the Nigerian Protest, such an event happening in Nigeria dominating world news headlines seemed like a farce and very unlikely. What is wrong with these people? Pointing to such detailed prophecy of the Nigerian Protests as News reading, what news report furnished us with the details of TB Joshua's October 16 prophecy? Certainly not the Reuters News report they provided a link to.

TB Joshua did not only talk about protests, he also explained in the same prophecy that the world was only witnessing 30% of the crisis at the time, economic depression swallowing up terrorism in 2012, currency devaluation – especially of the euro, countries not having enough money to buy oil, a law that would limit the amount of money people can move and so on. Which news report gave any of these details?

If they could dig up a Reuters report that talked up a protest taking place in Rome, (hundreds of thousands of miles away from Nigeria) how does that automatically translate that such would happen in Nigeria judging by the fact that Nigeria has never in its history experienced anything of such? This is the classic guilt by association fallacy they use in deceiving people about TB Joshua, even in regards to healings and miracles which we've addressed in earlier posts, listen to how they expanded on their ad hominem fallacy on this prophecy;

At this point, his supporters will be quick to point out that he also mentioned protests in his home land of Nigeria, and those have only recently started. However, when taken in the wider context of worldwide protests spreading country to country, and the economic and political climate Nigeria was already in, it would be more remarkable if street protests didn't happen!

Did they just say; It would be more remarkable if street protests didn't happen in Nigeria over three months ago? What in the world warrant expectancy of protests in Nigeria? Nigeria has since been in a sordid economic and political climate since independence, and that never resulted in protests, What fueled such expectancy when such has never happened in Nigeria's history? Even if wall street protests did happen overseas, it could have very possibly not spread to the shores of Nigeria and People would be calling TB Joshua a prophet of Doom, because that of Nigeria was sparked of by a 100%+ increase in fuel costs, not because of the circumstances that led to protests in all other Nations, even the Reuters report they alleged was the source of TB Joshua's prophecy said some were disappointed the crowd was not larger and the protests were Not As Large As they had Hoped, adding that “People don't want to get involved” so there was even a greater prospect of the protests in Nigeria not happening than otherwise.

*Ad Hominem: An association fallacy is an inductive informal fallacy of the type hasty generalization or red herring which asserts that qualities of one thing are inherently qualities of another, merely by an irrelevant association.