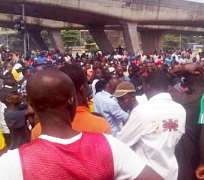 KANO, January 17, (THEWILL) - The Kano State Chapter of the Nigerian Labour Congress (NLC) has finally succumbed to pressures from the state government and police to end protests against the increase in the price of gasoline.

Kano NLC Tuesday resolved to obey the directive of the national body of the NLC, which directed that workers should abandon the nationwide strike and return to work.

The chapter had earlier refused to obey the directive insisting on continuing the strike action.

But State Chairman of the NLC, Comrade Inusa Danguguwa said he would however in his individual capacity join others to continue the protests against fuel subsidy removal.

At a meeting held on Tuesday at the NLC Secretariat, Comrade Danguguwa said the State Executive Council (SEC) of NLC resolved to suspend the strike, but emphasized that he would join other civil organizations and activists opposed to the increase in the price of fuel to fight the policy.