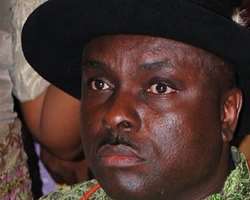 SAN FRANCISCO, January 17, (THEWILL) - After both the London Metropolitan Police and the Economic and Financial Crimes Commission (EFCC) accused James Ibori of massive corruption and claimed to have a water-tight case against him, in a dramatic turn, the Crown Prosecution Service (CPS) has surprisingly dropped the corruption charges against the former Governor, THEWILL can exclusively report.


Although no official reason was given for this surprising development, a source with links to the CPS informed THEWILL that the corruption charges had to be dropped as they would have been hard to prove and this would have ultimately caused the British Government untold embarrassment bearing in mind the considerable amount of time, money and effort so far put into the case.


James lbori was the Governor of Delta State from 1999 to 2007 and is currently being detained whilst awaiting trial in London. The allegations against lbori are that during his 8 year tenure in office, he unlawfully enriched himself by defrauding the oil rich Delta State.


After leaving office as Delta State Governor, lbori, was arrested in Nigeria on corruption charges and detained in Kaduna Prison. lbori eventually faced 170 charges of corruption at the Federal High Court, Kaduna before the case was transferred to the Federal High Court, Asaba. The case which attracted much media and public attention was eventually resolved in Ibori's favour, after the Judge dismissed all the charges against him, which elicited mixed reactions from the public. After the failure to secure a conviction in Nigeria, the EFCC and the Metropolitan Police Service of London, then decided to try him again, but this time to change the venue to London, in the hopes of securing an easier conviction. The challenge was however getting Ibori to London as he was alleged to have enjoyed the support of influential Nigerians including a sympathetic Attorney-General, Michael Aondoakaa SAN.


The next episode of this saga featured the trials in London of lbori's wife, sister, personal assistant, mistress and lawyer. The main feature of all of these trials was that lbori had been a corrupt Governor that had defrauded his state and laundered the money through the UK with their assistance. After the death of President Yar' Adua and with the change of guards, renewed efforts were made to bring lbori to London. Whilst on holiday in Dubai, he was arrested by Interpol as exclusively reported then by THEWILL, and detained in Dubai, on behalf of the Metropolitan Police Service for almost a year.


The extradition proceedings and eventual order of the Metropolitan Police Service were based on corruption charges. Following Ibori’s extradition to London on 15th April 2011, a 25 count charge was filed against him. The entire case against him was based on the allegation that while he was Governor of Delta State James Ibori was corrupt and that he unjustly enriched himself. This was maintained through his court appearances in the Westminster Magistrates Court and the Southwark Crown Court. Ibori on his part maintained that the entire case was political.


However the first signs of trouble in the prosecution’s case was detected during pre-trial legal arguments that took place in December last year when the prosecution amongst other things sought to remove the corruption charge from the indictment and in a bizarre twist, Ibori’s own lawyers opposed this application and insisted that count 1 (the charge bordering on corruption and the defrauding of Delta State) should remain on the indictment. The rationale for this appeared to be that the defence was arguing on behalf of Ibori that at all times, the allegations of corruption had always been the nucleus of the prosecution’s case and that the time had now come for the prosecution to prove the allegations of corruption against Ibori.


THEWILL exclusively gathered Tuesday from reliable court sources that the prosecution has proposed a new indictment in which the corruption charge and conspiracy to defraud Delta State will sensationally be removed from the allegations leveled against Ibori.


In a way, this can be viewed as a significant victory for Ibori said a legal analyst, who has followed the trial, arguing that the prosecution seems to be accepting that they may be unable to prove this allegation in a court of law. The other charges remaining in the case bother on money laundering via the misuse of the British banking system.


One source close to the former governor told THEWILL that Ibori’s primary concern is his accountability to the people of Delta State and with the removal of this charge he now feels fully vindicated as the issue of corruption and embezzlement whilst in office is no longer in contention.


In the same vein, a source with links to the CPS team said that the corruption charges had to be removed because it would have been an uphill task for them to prove it in a court of law and ultimately cause them great embarrassment if they had lost it bearing in mind the considerable amount of time, money, energy and effort they have put into the Ibori case. To date, the Metropolitan Police officers have made over 25 trips to Nigeria in furtherance of their investigation into the Ibori matter and rumoured to have spent in excess of $14million on the case, making it one of the most expensive investigations and prosecutions in Britain hence their determination to secure a conviction.


One can only wonder how James Ibori himself must feel with all these developments; although the man is not a stranger to intrigues, as the facts have shown. Indeed there is however widespread speculation about his next move. Some believe that he may soon enter into a plea bargain with the CPS while others say he will fight on to the logical conclusion of the case. Whatever the case may be, Ibori can at least rest a little easier now that there is no more allegation of corruption hanging around his neck!