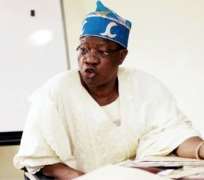 SAN FRANCISCO, January 17, (THEWILL) - The Action Congress of Nigeria (ACN) has condemned a published statement credited to President Goodluck Jonathan in which he seemed to lend credence to the meaningless propaganda that the bulk of the so-called government subsidy on fuel is being consumed by Lagosians.

In a statement issued in Abuja on Tuesday by its National Publicity Secretary, Alhaji Lai Mohammed, the party reiterated its earlier warning against turning the debate on fuel subsidy to an ethnic or sectional issue, describing the trend as unhealthy for national unity and unbecoming of a President who said he received a pan-Nigeria mandate.

''While speaking at the 2011 President's NYSC Honours Award in Abuja on Monday, President Jonathan was quoted as saying the government cannot continue to borrow money to subsidize fuel for people 'who have 10 or 15 cars and all their under-aged children will be driving the cars around Lagos'.

''Apart from the fact that the statement is unpresidential, singling out Lagos in a country that has many other cities with a high number of cars, just to justify the government's unpopular policy of fuel subsidy removal, is putting a presidential seal on the crude and irresponsible newspaper adverts by groups that have introduced a sectional/ethnic angle to the debate on fuel subsidy.

''The President's statement, on the same day he deployed troops to Lagos to harass and intimidate unarmed citizens, is a window to his innermost thoughts and feelings about the people of Lagos in particular and the entire South-west in general. If this is not so, we demand a retraction of that unfortunate statement and an apology from the President,'' ACN said.

The party said even with the saying that human memory is short, it is too soon for President Jonathan to forget the role played by the people of the state and region that he has now chosen to denigrate in championing - purely on the principle - his elevation to the post of Acting President, when he was being squelched by the cabal surrounding late President Umaru Yar'Adua

''Mr. President, please recall that the million-man-march by the Save Nigeria Group (SNG) against the attempt to sideline you, when President Yar'Adua was indisposed and unable to carry out the functions of his office, was held in Lagos. Also, our party, the ACN, played a foremost and constitutionally-driven role - even more than the waffling PDP - in this regard.

''Mr. President, please recall that Lagos and Ogun states moved for the implementation, at the national economic council, of the 13% derivation that is now being enjoyed by states in the South-South, and that the votes of the people of Lagos and the South-west contributed to making you President.

''Therefore, it neither advances national unity nor extol the virtues of good leadership for you to join the ethnic and sectional jingoists seeking to demonize the people of a certain state or region over an issue that is of great interest and concern to the entire people of Nigeria. Lagos state in particular and the South-west in general have done nothing to warrant the increasingly brazen attacks against them in recent times,'' ACN said.

The party warned that the President and his party, the PDP, must know that their actions in recent times will not go unnoticed the next time they come seeking for votes in this much-vilified state and region.