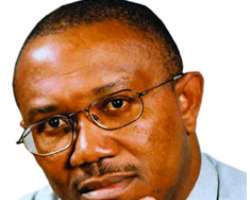 The lingering face-off between the National Chairman of the All Progressives Grand Alliance (APGA), Victor Umeh, and Sylvester Nwobu-alor, uncle to the Anambra State Governor, Peter Obi, is still far from over. As a result, the two political gladiators have engaged each other in brutal political war and what seems like an endless battle as both of them are currently reaching for each other's jugular.

Interestingly, the greatest opponent to the embattled National Chairman of APGA incidentally is also the Special Adviser to the Governor on Parks and Markets. Many posers have been drawn from the raging political imbroglio between the governor's uncle and national chairman of a party on whose platform the governor rode to power without any form of official proclamation from the party caucus either to rebuke the governor's uncle for attacking the national leadership of the party or to support his call for the removal of the chairman.

However, most of the jigsaws that have remained unanswered in the entire impasse, especially in Anambra State, the home state of the two political heavy weights is why Governor Peter Obi has not responded to the bickering between Nwobu-alor and the national chairman of his party, on whose platform he is representing in the state. Daily Sun also gathered that there was also what looks and indeed represents serious case of conspiracy of silence among Igbo leaders, who may be jostling to take over from President Goodluck Jonathan in 2015.

It also seems that Ndigbo, through the Ohanaeze Ndigbo, led by Ambassador Ralph Uwechue, is apparently waiting when the little crisis which started from the backyard of Obi's kitchen engulfs all other parts of the South-east.

As it stands, the clanging cymbals of political war that just started raging from Anambra State between two brothers, who may be fighting over larger respect in their communities is definitely not a healthy political atmosphere for a party that is still grappling with stunted growth.

In the recent fracas, the two political enemies engaged each other in war of words.

Victor Umeh on Nwobu-alor
However, in response to the call, the embattled Umeh said the call for his resignation by Nwobu-alor was unfortunate and ill conceived. 'The person you referred to is not a Christian. So, I don't have the whole world to worry about him; as people of God we are restrained from reacting to statements from such people. The special adviser to the governor you are talking about is not a Christian. He does not have the authority to speak.'

The national chairman of the party also said the call for his removal by Obi's uncle was a ploy to assassinate his character, adding that the party leadership under him was better equipped to confront other political parties in future elections. 'In a philosophical way, I will dismiss him since he said he has called on me to resign, even those behind him and the god he worships can't push me out of APGA leadership and there is no point praying for his soul,' Umeh said.

There is no crisis in APGA, even the state chapter has been issuing statements against him. He is not anybody in the party. I doubt if he has APGA membership card. His only credential is that he is the uncle to the governor and he has constituted himself to nuisance in the state,' he added.

'About 1000 Nwobu-alors can't push me out of APGA leadership because all the party leaderships in the country are behind me. His nephew, who is Governor Obi, should call him to order. At 85 years of age, he has nothing to show for again in Anambra state. He has no future again. At 85 years, he has no wife; he has never married. So, he is leaving no child behind who can fight for Igbo race.'

Nwobualor on Umeh
In a swift response to the verbal vituperations poured on him by the embattled Chairman of APGA, Nwobu-alor, who was alleged to be the leader of a pressure group within APGA that called themselves 'APGA National Stakeholders Forum,' said they would not go back on their stand to remove Umeh. In a communiquÃ© issued at the end of their Interim National Executive Council of APGA in Abuja published in some national dailies, the group through the Interim National Chairman, Dr. Hajiya Rabia Cengiz, and three other executive members called for the removal of the national chairman of the party within 21 days.

Part of the communiquÃ© reads in part: 'That the opinion poll conducted by the mobilisation and communication committee shows that 81.7 per cent of members of APGA support restructuring of the party. That consequently thereof, Chief Victor Umeh is by this publication (the communiquÃ© as published in Daily Sun, Friday, Dec. 16, 2011 on page 30) to officially vacate the seat of the National Chairman of APGA within 21 days of the date of this publication.'

'That in the event of his failure to comply with this directive, the National Stakeholders Forum, as legitimate owners of the party, shall take lawful steps it deems fit to enforce compliance.'

On the battle between Nwobu-alor and Umeh, the group, which included the National Interim Secretary, Dr. Mike Adams and the Deputy Chairman, Dr. Frank Orjiakor, also said: 'That Sylvester Nwobu-alor, is a man of honour, wisdom and foresight and no amount of blackmail, mudslinging and insults by Umeh against him can reverse those sterling qualities, as evidenced by his silence in the face of unwarranted provocations.'

The conspiracy of Silence
It is obvious that since the war broke out, the leadership of APGA, both in Anambra and Imo States, has remained indifferent even in the face of the cataclysmic vortex of political doom in the party. The Governor of Imo State, Chief Rochas Okorocha, has been accused of taking sides in the party as some of them accused him of trying to bring the former leader of the party, Chief Chekwas Okorie, back to the party leadership.

If that is to be taken with any pinch of salt, then it means that Umeh may be in for a very tall and long battle because it appears he is alone in this war.

It will be a clear case of the Igbo adage that when a lion breaks his legs, antelopes will suddenly remember it is indebted to them, and will summon courage to come and ask for it. It means that there are unseen hands in the travail of Chief Victor Umeh.

Can't we make out something to ask where indeed are the crimes of Chief Victor Umeh that has made him look like a political orphan in the face of political adversity? It is either the saying that a bird dancing on the road has orchestra supplying tunes for it from the bush or he is suffering the consequences of his wrong doings.