When you beat your wife, you’re beating yourself – Gloria Anozie-Young 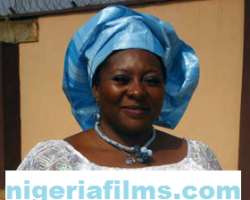 Her name recalls her exploits in the Nigerian film industry, but today, Vista Wowman is unveiling the other side of ace Nollywood star, Mrs. Gloria Anozie-Young. For years, Gloria Young has been a women's rights activist, educating women all around her on how to identify and prevent gender-based violence.

With the just concluded commemoration of the United Nations '16 Days of Activism Against Gender-based Violence (November 25-December 10)' still green in the memories of women across the globe, Gloria who is happily married to Nollywood star, Nobert Young, with three children, bares her mind on violence against women. Hear her:

I CANNOT fathom why violence against women is increasing. I hear so many terrible stories, and wonder why these men can't find some other objects as punching bags. Why would you beat your wife?

You're beating yourself! God has joined you both and made you one, and you should know that when you hurt your wife, you're hurting yourself. Not just your wife; you shouldn't beat any woman at all. As female, God made us soft. We need to be protected, and not treated horribly.

I wonder why men now behave this way; our fathers never did that. Why are we training our children to be violent? Why must we tell a male child to behave like a man? Can't he behave like the human he is meant to be? Why do you say to him 'You're a man; don't cry'.

That's where it starts from. When you tell him not to cry, then how does he let out his anger when he is angry? I ask again: How does a man let out his anger when he's told 'Men don't cry'? His available option will then be to hit the person who got him angry! I would never forget the day one of my immediate younger brothers( a twin) was so angry at a particular person.

He couldn't hit the person because he wasn't trained that way. Do you know what did? He hit the glass, and his hand went through it. Thank God he wasn't injured.

The whole glass pane fell down, but there was not a scratch on his body. That is to tell you how angry he was. What if he had used that strength on the one who made him angry? Only God knows what would have happened. If you train your child properly, he would not lift his hand on a woman.

If your male child watches you as a father, beat his mother, he will think that's the right thing to do, and the next day, he will beat his sister, and later beat his wife. We must all stand up and say no to that. Women, please don't keep quiet. If your man beats you, report him to the social welfare office where a case will be made for you. I don't know how functional that office is in other states, but I know it is a very viable and strong office in Lagos State.

Don't wait until you've been wounded. I've seen women who kept quiet, and were eventually killed in the act by their so-called husbands.

I have seen three children (a set of triplets) born to a man who killed the wife after the birth of the children. Because the man was drunk, he slapped, kicked, and beat up the woman until she gave up the ghost.

The children now live in an orphanage! You see how the family is destroyed. Again, we need to also talk to our women. As a woman, you know your only weapon is your mouth, then why stand near your man when you use it?

If you ask my husband, he will tell you “My wife's mouth is very sharp, but I don't do anything.” You know what, I don't give him the chance to even do anything because when men react sometimes, they do it without thinking of the aftermath.

Later they will come to pet you and tell you 'sorry' when your whole arm and body is already hurting. When I stand to use my weapon (mouth) as a woman, I stand far away from my husband.

Then if he tries to move, I hide myself. You must run as a woman because if you're slightly hit, you could experience a breakdown which will automatically affect the running of things in the home. What I'm saying here is that as a woman, if you can't hold your mouth, stand far and run if you perceive danger. Don't also forget to return to say 'sorry 'if you happen to be the guilty party.

On the issue of rape, I want to say that our values and norms encourage us not to expose our body indiscriminately. However, the way we dress is not the major cause of rape, but a contributory factor. We were taught that if you expose yourself in a disgraceful manner, you're telling the men that you're an easy-lay. They will believe you can accept anything dished out to you.

When we want to copy from the westerners, why don't we copy the good things? In being fashion conscious, we need not compromise decency. However, I want to state clearly that there's no excuse for raping any woman.

As a matter of fact, those who rape women are men who have a psychological problem; they want to foolishly prove that they're strong. If not, why should a grown man think of raping an infant? An innocent child who knows nothing! You might say what's the big deal about rape?

Isn't it ordinary sex? No, it is sex against a woman's will! That's where the problem is. A woman's physical anatomy demands that she be caressed, begged and touched in different ways; otherwise, she will stiffen up, and if she is forced, she gets hurt and feels the tear in her head.

To check rape, I would advise ladies not to always walk or live alone. We still have the extended family system; if you're a spinster, you can get a cousin, nephew, niece, etc. to come live with you. Most importantly, I implore all women to put up a proactive effort towards ensuring the domestication of the United Nations Convention on the Elimination of all Forms of Violence Against Women-CEDAW bill because it will ensure a protection of our rights. I see no reason why it is taking our government time to make it a part of our national law since June 1985 when it joined other UN states in ratifying it.

After attending the Methodist Girls High School, Yaba, Lagos, I travelled to the United States of America (USA) where I had my A' levels at Thomas Jefferson High School, Dallas, Texas, USA. I later went on to the El-Centro College, Dallas, where I studied Mass Communications.

However, on my return to Nigeria, I did a two-year course with the Nigerian Institute of Journalism and that prepared me for the stint of journalism work before veering into the film industry'.