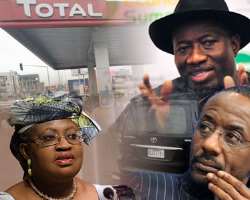 I urgently appeal to Nigerian labor, organized civil society, national assembly, and indeed all Nigerians to listen to me. I request Nigerians who either have agreed or are considering agreeing with government’s arguments on the benefits of removal of fuel subsidy to please give me some attention.

Government officials tell Nigerians that the Nigerian government borrows huge amount of money to subsidize PMS, and that this borrowing is unsustainable. My problem with this argument is another argument of government. The Jonathan government sets up, albeit illegally, a phantom Re-investment committee to manage savings from the subsidy removal.

In fact, it has published a document on spending on “palliatives” sequel to removal of fuel subsidy. It goes ahead to allocate more than N 400 billion each to both the federal and state governments, and more than N 200 billion to local governments. If the federal government claims that it borrows to subsidize fuel (PMS) consumption in Nigeria, and claims that such borrowing cannot be sustained, then whence come the “savings” that it has already allocated without visible inputs of the Revenue Mobilization, Allocation and Fiscal Commission? The Jonathan government is lying to Nigerians. There is no saving anywhere that would make any significant difference in the welfare of Nigerians.

One of my readers made a comment that set me thinking. Huge amounts of money were spent by President Jonathan in the 2011 elections. Interestingly, Jonathan says that in the same year his government overshot the vote of N 240 billion for fuel subsidy in the same year by more than N 1 trillion, and that without appropriation by the national assembly. The highest ever spending by a Nigerian government on fuel subsidy was recorded in 2011; this is most appalling when only one product (PMS) supposedly got the highest subsidy allocation. What happened in 2011 that made Nigerians to register the most demand for PMS? Were they more prosperous in 2011? In fact, according to available figures, imports of cars into Nigeria dropped significantly in 2011 by more than 40 percent! Besides, more Nigerians were pushed below poverty line in the same year.

President Jonathan is desperate to cover his tracks. He and his colleagues in government corruptly enriched themselves; fearing exposure in 2012, he is bent on removing fuel subsidy, alleging that a few cabal members were benefitting at the expense of Nigerians he claims to love. But is it not his government that approved payment to those cabal members, some of whom financed his election? His government should know, at least from 2009 and 2010 consumption levels, that it must ask questions when subsidy expenditure doubled in the succeeding year without supporting facts and relevant indices of prosperity. Did he make any queries? The senate committee that is probing fuel subsidy spending is getting too close to the facts for comfort. I warned in 2007 when President Yar’Adua and then Vice-President Jonathan got into office that Nigerians were at the door steps of the worst era of corruption in the history of this country. Jonathan and his former boss wasted more than 20 billion US dollars in the excess crude account and almost 60 billion US dollars in the foreign reserves without doing any of the things Jonathan apologists are talking about. I listened to one of Jonathan apologists say how the government of President Obasanjo should have used the 12 billion US dollars it gave away for debt forgiveness for development of infrastructure. He then claims that President Jonathan would use “savings” from fuel subsidy removal to give Nigerians the relevant infrastructure Nigeria does not have. Those people take us for fools. If Jonathan has squandered more than 12 billion US dollars without building infrastructure what then is the argument here?

President Jonathan lacks the moral strength to fight corruption. He is corrupt himself, and is so clever to make it appear as if he is fighting corruption. Jonathan must give account to Nigerians why he wasted our money on paying those his government argues are feeding on the fuel subsidy. Jonathan’s government is confessing weakness.

Government officials argue that Nigerian neighbors benefit from fuel subsidy through smuggling. What is the work of government then if it cannot secure our borders? President Jonathan wants Nigerians to pay for the inefficiency and corruption of government. Impunity reigns in the land, and Jonathan encourages it when his government cannot prosecute those cheating the system. He encourages impunity when he runs away from the responsibility of governance to rather inflict pains on Nigerians as an escape route.

If government is so concerned about cutting cost why would any public official in Nigeria earn about one million US dollars a year? I have published that less than 18,000 Nigerian public officials earn in salaries and allowances more than N 1.2 trillion a year. Sanusi belatedly raised similar issues, but only on expenditure on the national assembly, last year. President Jonathan should cause to be published what all public officials in Nigeria earn in salaries and allowances; and the Revenue Mobilization, Allocation, and Fiscal Commission (RMAFC) should exercise its powers under the constitution to reduce all allowances to levels that would make remunerations to reflect the present N 18,000 minimum wage and the current regime of sacrifice. Accordingly, I propose that the highest paid public official in Nigeria should earn not more than 30 times the national minimum wage. I say that if the Nigerian economy cannot sustain fuel subsidy, which it will be revealed this year is far below N 500 billion, much more can it not sustain the obscene earnings and lifestyle of Nigeria’s public officials.

Let me advise Nigerians who claim that they are losing income during the national shutdown to reason with me. How much is that income that you think can withstand the humungous hike in the price of PMS? What sacrifice can we ever make to have a better nation if we cannot bear few days or weeks of a shutdown? We can only get what we deserve. This shutdown is and should be beyond fuel subsidy removal. It is a first step to taking back our country and ending this era of impunity, corruption, and cabalization of our national life.

I propose to labor that Nigerians should take numbers from 1 to 7. There should be coordinators all over Nigeria for each of the numbers. 1 corresponds to Monday, 2 to Tuesday, and so on. This would guarantee sustenance of the struggle and shutdown. A Nigerian therefore would go out only once a week to protest. There should be coordination of supplies of water, snacks, drugs, and parasols; Nigerians would be asked to donate those supplies at rally centers and “Occupy” locations. We should think ahead strategically as we confront an uncaring and stolid government that lacks good conscience. In different cities my suggestion should be implemented. I understand there are many unemployed youth who are part of the protests. Those of us who have some means should be provided the opportunity through coordination efforts I have proposed to make donations to sustain the struggle. We must not give up this opportunity for national redemption. Speeches should be well planned and delivered. Protest rallies should be platforms to educate and enlighten Nigerians on the plight of the nation and the dangers of doing nothing. Labor can recruit speech writers and give platform for speech readers to move Nigerians intelligently forward in the struggle.

Words carefully structured with facts and delivered are highly motivating. I volunteer to write some of the speeches laced with unassailable facts and figures for labor, to be delivered across the country. Now is the time to shoot down lies; now is the hour to reclaim our country. It is right to build a nation.

** Leonard Karshima Shilgba is an Associate Professor of Mathematics with the American University of Nigeria and President of the Nigeria Rally Movement. He is also the Chairman of the Middle Belt Alliance (MBA). TEL: +234 (0) 8055024356; EMAIL: [email protected]