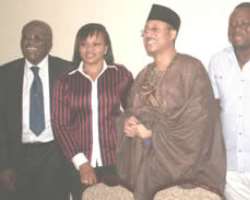 A professional group, Committee for Relevant Art (CORA) has noted with concern the national strike which has grounded the country and has severely affected economic activities all over the country.

Against this backdrop, the group reminded that 'it is on account of such sad, avoidable fallouts that CORA has always preferred the path of national consensus through conversations and debates.'

Also, piqued by the awesome state of the nation vis a vis the thorny issue of fuel subsidy removal, a group, National Summit Group (NSG) has deemed it imperative to organise a forum where the fundamental issue affecting the country would be discussed.

In a statement jointly signed by Toyin Akinosho and Deji Toye for its Working Committee, CORA stated that it was in order to increase the space and capacity for popular participation in national conversations that the group placed literacy at the top of its organisational agenda.

'Afterall, the nation building project is, at core, a series of conversations. In our view, the current situation cannot support any enlightened and productive dialogue - not on the subject of fuel subsidy removal nor indeed national development,' it warned.

When a town hall meeting on the subject was held in Lagos at the end of last year, we had noted with commendation what appeared to be the prelude to just such a dialogue. At that meeting, the issues were already being formulated for the real conversation to take off.

According to the statement, government needed to engage the citizens more with a view to building trust and taking their suggestions into consideration, adding that 'it is in this regard that the sudden announcement of the removal of subsidy on fuel on New Year day was not just precipitate, but also counter-productive.'

The government, CORA insisted must now return to the path of dialogue through the reinstatement of the condition for same. Also addressing a press conference in Lagos yesterday, Convener of NSG, Professor Pat Utomi disclosed that 'a summit to be attended by concerned eminent Nigerians has been slated for next Monday and Tuesday in Lagos to discuss Nigeria's matter.'

According to him, Nigeria has been facing challenges since 1960 and she has been weathering the storms expressing fears that 'with the current situation in the country now, something must be done urgently to save it from disintegration.'