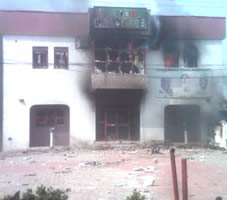 Their action was in response to a broadcast by the state's Head of Service (HOS), Ibrahim Matane, directing civil servants to return to work.

According to the protesters, 'it was wrong of the Head of Service to direct people to go to work. We are not going to allow anybody to go to work until when Jonathan reverts the pump price of N65 per litre of petrol.'

The Nigeria Labour Congress (NLC), Trade Union Congress (TUC) and civil society groups had last week ordered a nation-wide strike in protest against the Federal Government's hike of petrol price from N65 to about N145 per litre effective from January 1, 2012. Transport fares went up by 150 per cent. The strike and protests, which started on January 9 and grounded the country, were adjudged successful by organized Labour.

But in venting their anger against the Niger State government yesterday, protesters went on a burning spree.

Also torched was the glass house of the legal firm of Tanko Beji, Deputy Chairman of the Peoples Democratic Party (PDP) in the state and the constituency office of Hon. Jummai Jafaru of the State House of Assembly, along Bosso Road were vandalized. About 30 vehicles were burnt, 10 of them were torched at the premises of INEC and eight at the Federal Inland Revenue Service (FIRS) and the rest at the old secretariat in Minna.

The tensed situation in the state capital, Minna, had earlier compelled the state government to call for soldiers to take over some strategic areas. Military personnel were also deployed in the Government House, while the major roads leading to the governor's residence were manned by a combined team of soldiers, policemen and State Security Service (SSS).

In what looked like an organized action, youths in various sections of the town as early as 8:00 a. m. gathered, blocking major roads in their areas, while another group gathered at Mobil, the heart of the state capital, setting fire on the road before descending and attempted setting the Governor Mu'azu Babangida Aliyu Campaign Secretariat on fire.

But for the intervention of policemen dispatched to the area, who quickly mobilized to put the fire under check, the governor's campaign office would have been engulfed by the fire set by the hoodlums. The police officer, who got injured in the course of putting out the fire, later died.

The hoodlums also invaded a popular privately-owned bakery in Tunga area, carting away all the loaves of bread and pastry before vandalizing the bakery. The residence of Senator Dahiru Awaisu Kuta, Chairman, Senate Committee on Federal Character, was spared by the timely intervention of his neighbours, but two cars and a motorcycle parked in front of the house were not lucky, the fireworks of the irate mob reduced them to ashes. The irate youths also destroyed the on-going beautification project at Onigbinde Roundabout, while some cars were also allegedly destroyed at Kpakungu area of the town by the youths, accusing their victims of not staying in their houses.

At about 11a.m, gunshots were heard along the Bosso Road- a stone's throw to the Government House. There were gunshots in Chanchaga and Kpakungu areas of the state capital. The hoodlums also barred people from moving around, insisting that the residents should stay indoors, while those who have shops in their neighbourhood were issued with threats of vandalizing the shops if they were not closed. It was gathered that the development stalled the state executive council meeting scheduled to hold at the Government House, as the hoodlums have seized all the major roads leading to the seat of government.

Meanwhile, the state government has condemned the wanton destruction of public and private structures, waste bins and beautification trees by miscreants who exploited the ongoing fuel subsidy protests called by Labour, describing the action as irresponsible. A statement by the Commissioner for the Environment and Solid Minerals Development, Abubakar Baba Jibreel, said government was shocked at the barbaric act considering the fact that the structures destroyed were put in place for the beautification of the environment and the promotion of public health. He blamed the state NLC for the rampage.

But the state chairman of NLC, Comrade Yahaya Ndako, disassociated the congress from the activities of the hoodlums. In a telephone interview, Ndako said he was going to Radio Niger to appeal to the people.

'The congress is not and cannot support the wanton destruction going on now in the state capital. We are not party to it. Our action was and is still a peaceful protest and not looting, burning and destruction of public and private properties,' Ndako told our correspondent.

Meanwhile, the state government yesterday declared a 24-hour curfew on all the 25 local government headquarters.

In a statement signed by Daniel Shashere, Secretary to the Niger State Government (SSG), government lamented that the protest by organized labour and civil societies which started peacefully on Monday, 'has been hijacked by miscreants and hoodlums' who have taken laws into their hands by creating bonfires on the streets of Minna, torching public and private properties.

According to Shashere, 'government has a responsibility to protect lives and property, warning citizens to stay indoors until further notice. 'Nigerlites should regard this as a critical measure necessary to curtail further wanton lawlessness by unscrupulous elements in the society.'