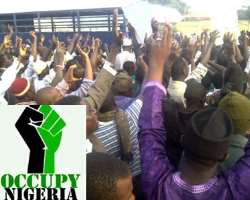 President Goodluck Jonathan of Nigeria has set a stage to go down in history like Ben Ali , Hosni Mubarak, and Mohammed Gadhafi. These are former presidents in recent time that under-estimated people’s power and paid dearly for their negligence.


President Jonathan is moving along this line because of his irrational decision to remove the so called imaginary fuel subsidy on the first day of the year 2012. Nigerians are saying the subsidy is a hoax; a government invention to raise tax and create more burden for pauperized citizens.


The consequences of the Jonathan’s action would be disastrous to the future of the Nation as: millions of the present and future generation of youth would be denied access to good livelihood. Unemployment and poverty would increase. Frustration due to lack of opportunity will further push many youth to the destructive paths of terrorism, armed-robbery, fraud, "419" and prostitution among others.

Republic of Ghana, with discipline political leaders, good infrastructures and good education policy increased PMS by 20%. However, Nigeria, with unpredictable, corrupt and unreliable government raised petroleum product by over 100%.

It is not very clear if the president received accurate intelligence report as regards to time to start, implementing the zero-subsidy policy, considering the current security challenges in Nigeria. President Jonathan is either complacent or under-estimating the intelligence report available to him.


One of the known causes of intelligence failure is “under-estimation”. This is the syndrome in which the intelligence services or the political leadership completely misread or failed to understand the enemy's intentions.


President Jonathan has failed completely to read and understand that Nigerians are fed up; the people are ready for a change and only waiting for an opportunity. The removal of this imaginary fuel subsidy may be a catalyst. Of course, it is a wrong time to introduce this type of policy no matter how good the government’s intention.


Therefore, President Jonathan should be a good student of history. He should learn from the situation that led to the Arab spring. The West through IMF that are drumming support for his government on anti-people’s policy will turn their backs against his government if Nigeria police kills more than a hundred people in the cause of the protest. In fact, they will call for his trial at the international criminal court of justice, for murdering his people.

Okonjo-Iweala is an American; she will leave Nigeria and return to Washington DC if war breaks out in Nigeria tomorrow. None of his family is here in Nigeria.


Today, the protracted demonstrations and condemnations, which follow the policy is enough signal that the move was wrong. There are enormous open source intelligence reports to support the imposition of the policy is not timely. Complacency, under-estimation, and over-confidence may have severe security implication. It may be the beginning of the long-awaited Nigerian Spring.


In the case of President Ali of Tunisia, he never had intelligence at all. That was why he never wasted time to run away for his dear life. When there is virtually no intelligence, you are at the mercy of events. The individual action of Mohamed Bouazizi, a young fruit seller sets a stage for the Arab spring, leading to regime change in Egypt and Libya. Who ever thought an action of an individual could trigger a revolution?


On the other hand, President Mubarak of Egypt relied much on the U.S. government to deliver him from his people. Of course, the U.S. government and the West has been his major backer for over three decades of his dictatorial regime. The West turned against him because they could read between lines based on the credible intelligence available to them that the Egyptians were determined to effect a change. Mubarak also under-estimated his people’s power in spite of all the intelligence reports locally; and even from his international allies, including the United States that his government would collapse. Today, Mubarak stands trial for corruption and murder of hundreds of protesters during the uprising.


Ghadafi under-estimated the mass movement of his people to the extent that he called them rats when a few people started the uprising in Bengazi. He was busy drinking black coffee in his mansion and it was too late for him because Tripoli fell to his disbelief. The citizen’s army later caught him and gave him a jungle justice. He died as a result of overconfidence and under-estimation.


Finally, President Jonathan should be warned not to under-estimate people’s power because there is anger in the land. Nigerians cannot sacrifice any longer. The Jonathan and its supporter club should be cautioned that Nigerians would resist vehemently all attempts to take away subsidy. In the face of reckless spending by the government on frivolous and useless programs coupled with the sustenance of a large retinue of jobless political apologist, executive touts and image launderers, it becomes difficult to accept the ruling government’s logic of inadequate government income to subsidize petroleum products for the common masses.