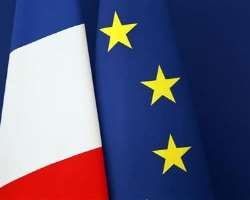 FRENCH (L) AND EUROPEAN FLAGS ARE DISPLAYED DURING A NEWS CONFERENCE AT THE HOTEL MATIGNON IN PARIS JUNE 21, 2011.
Listen to article

French borrowing costs rose slightly when the euro zone's second-largest economy sold debt for the first time this year on Thursday but demand was solid despite concerns the country could lose its AAA credit rating.

With a heavy schedule of debt redemptions in the first quarter, market fears about euro states' ability to fund their debts remains high. France, which has a slowing economy and a presidential election looming in April, is seen by many to be at greater risk from ebbing investor confidence than regional powerhouse Germany.

France sold 7.96 billion euros ($10.3 billion) of 10- to 30-year bonds at the auction, at the top of its projected range, after receiving total bids for nearly 15 billion euros.

The yield on the benchmark October 2021 bond rose slightly to 3.29 percent to above the 3.18 percent fixed when it was last auctioned on December 1, but remained in line with yields in the secondary market of around 3.3 percent.

The 10-year spread over Bunds was a whisker higher after the auction at 143 basis points, remaining well below its euro-era high of more than 200 basis points reached in November.

"Overall it's a pretty solid auction," Michael Leister, strategist at DZ Bank in Frankfurt. "It should be enough to dispel concerns with regards to France's funding capacity for the time being."

The yield on the 4.5 percent 30-year OAT maturing in April 2041 rose to 3.97 percent from 3.94 percent in the December 1 auction, the Agence France Tresor debt management agency said.

AAA HANGING BY A THREAD
France's top-notch credit rating is hanging by a thread due to its slowing economy, high structural deficit and banking exposure to the euro zone's most troubled debtor states.

Last month, Fitch put France's rating on a negative outlook and Standard and Poor's, which placed 15 euro zone countries under review, singled out France as the only AAA country facing a possible two-notch downgrade.

The solid French sale came after Germany successfully sold 4.06 billion euros of 10-year bonds at its first auction of 2012 on Thursday, with a recovery in demand supported by redemptions and coupon payments which left investors flush with cash.

That came as a relief after the upset of a November auction which drew bids worth less than the 6 billion euros on offer and sowed fears that contagion could touch the heart of the euro zone.

With a heavy schedule of euro zone debt maturing this year, particularly in the region's No. 3 economy, Italy, traders remain nervous about government finances despite an unprecedented injection of nearly half a trillion euros of cheap ECB funding for banks last month.

"Given the clear risk of an imminent ratcheting up of market tensions as Italy's February-April redemption hump looms closer, today's sales should be seen as a successful battle rather than in any way determining the outcome of the war," said Richard McGuire, senior fixed income strategist at Rabobank in London.

France plans to issue up to 178 billion euros in medium- and long-term government debt, net of buybacks, this year, down only slightly from 184 billion euros in 2011, despite the threat to its rating.

With its economy expected to enter recession in the first quarter of this year, France will need more painful austerity measures to reach a deficit target of 4.5 percent of gross domestic product this year, though the impending election may complicate that.

Adding to investors' concerns, Socialist election frontrunner Francois Hollande -- who leads Sarkozy by a wide margin in polls -- has pledged to renegotiate a fiscal compact being agreed by the European Union, potentially complicating efforts to solve the debt crisis. ($1 = 0.7747 euros)