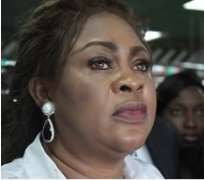 Stella Oduah
After the appointment of the Minister of Aviation, Mrs Stella Oduah, in June 2011, she promised to fully implement the government's transformation agenda in the nation's aviation industry. During her maiden visit to the Murtala Mohammed Airport in Lagos, the Minister did not hide her readiness to comply with the rationalization of government parastatals and agencies as directed by President Goodluck Jonathan during the swearing of ministers in Abuja.

Shortly after, the minister in what she described as 'the implementation of the Federal Government policy on rationalization of its agencies' went ahead to sack some of the chief executives of parastatals within the industry. Those sacked were the Managing Director of the Federal Aviation Authority of Nigeria (FAAN), Mr Richard Aisuebeogun, Rector of the Nigerian Civil Aviation Training College (NCAT), Kaduna, Captain Araba, and Managing Director of the Nigerian Airspace Management Agency (NAMA), Alhaji Ibrahim Auyo. They were replaced by Mr George Uriesi (FAAN), Captain Chinyere Kalu (NCAT), and Nnamdi Udoh (NAMA), who were all appointed in acting capacities.

These appointments sparked off rumblings with the industry watchers and stakeholders complaining about the fact that all the appointees were from the South-South and South-Eastern part of Nigeria. According to industry watchers, key posts in the Ministry of Aviation are occupied by the Igbo and Hausa, with the Yoruba heavily shortchanged in the scheme of things.

As at the end of November, only two people from the South West were left to head two aviation agencies. They were Engr (Dr) Sam Oduselu, Commissioner/CEO of Accident Investigation Bureau (AIB) and Dr Harold Demuren, Director-General of NCAA.

Oduselu was later on December 9, 2011 relieved of his appointment seven months into his second term in office without any reason. Aviation watchers have however described his sack by the Aviation Minister as illegal and a gross violation of the Civil Aviation Act No. 6 of 2006, which empowers the President to appoint the Commissioner/CEO of AIB for a tenure of four years in the first instance, renewable for another four years.

Industry watchers view the sack of Oduselu as a bad precedent and a naked show of power by the Aviation Minister to please a particular section of the country, which allegedly feels shortchanged by some recent appointments within the aviation industry despite the fact that their kinsmen are presently occupying three key positions in the ministry.

This apart, Oduselu is believed to have achieved a lot in his first four years in office that he needed government support instead of a sack. Oduselu, who was appointed in 2007, started the AIB without the normal take-off grant from government and nurtured the place to the standard expected by world aviation agencies like FAA and in line with the requirements for the United States FAA category one, which Nigeria attained recently.

As an acclaimed Aeronautic Engineer and accident investigation expert, Oduselu contributed in no small measure in minimizing air accidents in the country since his appointment over four years ago. He repositioned AIB to enable it perform its roles as defined by the 2006 Aviation Act. In performing these roles, AIB collaborated effectively with other parastatals and stakeholders to ensure compliance with basic aviation safety rules and regulations through regular interactions, conferences and seminars.

In 2010, he initiated and ensured the building of a befitting corporate office complex with a boardroom and training centre for AIB. The office has since been completed with the purchase of a 500KVA generator to ensure steady power supply to the complex.

Oduselu as AIB boss also commenced the process of acquiring equipment for the decoding of cockpit voice recorders (CVR) and flight data recorder (FDR) otherwise known as 'black box.' The Bureau partly paid for this equipment and it is sending its staff to Canada for technology transfer on the use and maintenance of the equipment. This process, if completed, will save the nation a lot of money spent on sending black boxes abroad for decoding anytime there is a plane crash as the process will now be done locally.

In thinking about the future of AIB, Oduselu has put in place a succession plan that will entail the recruitment of qualified young men and women to be trained locally and internationally to boost the staff base of the Bureau. This crop of young men will eventually run the affairs of the Bureau in future.

In view of the foregoing, industry watchers see Oduselu's sack as unjust and a gross act of disservice for the nation to sacrifice a resourceful and consummate professional like him on the altar of tribalism and nepotism.

The National President of the Oodua People's Congress (OPC), Dr Fredrick Fasehun, in a one-page letter to the President published in The Guardian on Sunday, December 18, 2011 condemned Oduselu's sack and called on President Goodluck Jonathan to correct the injustice meted out to him and other Yorubas that have been affected by lopsided appointments into federal agencies.

The OPC leader based his call on the lopsided nature of appointments into Federal Government positions, which has not favoured the South-Western part of Nigeria.