Nigeria and predictions of dismemberment 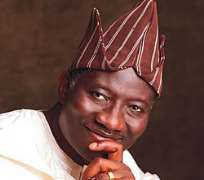 The drum of a possible break-up of Nigeria is sounding again, with national leaders denouncing such a possibility. Regional Editor (News), Olawale Rasheed, delves into the issues sourrounding the break-up apprehensions.

THE constant denunciation of possibility of Nigeria breaking up is a reminder of a seen or unseen fears and anxieties lurking somewhere about the state of the nation.

In the last few weeks, key leaders have reaffirmed the integrity of the Nigerian unity, raising questions on the seriousness of what they see or hear that excites such reaffirmation.

At his maiden media chat held two weeks ago, President Goodluck Jonathan declared that Nigeria remains indissoluble as the ship of the state is on course.

Whatever the nation is witnessing today, the Nigerian number one citizen said was a mere developmental challenge which other nations also face at one point or the other. His presidency, he said would strengthen rather than lead to the break-up of the country.

A former Chief Justice of the Federation, Justice Alfa Belgore, also joined the president to affirm that those predicting Nigeria's break-up are agents of doom who are scared of the future greatness of the federation. “They have always predicted our break-up and we have always proved them wrong. They said it will be in 2008, we survived. Now they said 2015, we will even survive better”, the erudite judge said.

And only some few days ago, the Minister in charge of the Federal Capital Territory (FCT), Senator Bala Mohammed, condemned any thought of disintegration, describing it as the imagination of those wishing the nation bad. The nation's ethnic diversity, he affirmed, are ingredients of development rather than division, calling on all patriots to engage in dialogue to transform national differences into national assets.

The development has even prompted some northern and southern leaders to form a national dialogue group to engage leaders from across the zones. The group, headed by Justice Begore, asserted its goal namely, the forging of a truly national front to erase the possibility of break up by addressing contentious issues agitating the minds of all segments of the polity. With members drawn from serving and former public officials, the group hopes to launch nationwide town hall meetings where Nigerians can air their views and espouse ways and means of strengthening the bound of national unity.

The advocacy for national unity is coming against the backdrop of a renewed call for a national conference to discuss the structure and the future of the nation. During the birthday celebrations of the founder of the Oodua Peoples Congress (OPC), Dr Frederick Fasheun, there was cacophony of voices calling for a sovereign national confab. Few days after the celebrations, Igbo leaders assembled in Lagos to also repeat the call, describing it as the most urgent challenge facing the nation. But the question is, why the sudden resurgence of promotion of national unity?

Analysts are of the view that the Boko Haram insurgency, the resolved or dormant Niger Delta insurgency, the peaceful activities of the Movement for the Actualisation Sovereign State of Biafra (MASSOB) and the ever vibrant OPC in the South-West may all be a source of worries and concerns. Recent events and development are also tied to earlier prediction by the American Intelligence Council of a possible break up of Nigeria by 2015.

It all started in January, 2005 when a one-day conference of US experts on Africa was convened by the National Intelligence Council to discuss likely trends in Sub-Saharan Africa over the next 15 years. Participants were asked to consider the US National Intelligence Council's report, “Mapping the Global Future”, which projected global trends and possible scenarios up to 2020. While covering so many issues, the report on the down side of future expectations noted the possibility of outright collapse of Nigeria.

The report, among others, stated as follows: “While currently Nigeria's leaders are locked in a bad marriage that all dislike but dare not leave, there are possibilities that could disrupt the precarious equilibrium in Abuja. The most important would be a junior officer coup that could destabilise the country to the extent that open warfare (may) breaks out in many places in a sustained manner.

"If Nigeria were to become a failed state, it could drag down a large part of the West African region. Even state failure in small countries, such as Liberia, has the effect of destabilising entire neighbourhoods. If millions were to flee a collapsed Nigeria, the surrounding countries, up to and including Ghana, would be destabilised. Further, a failed Nigeria probably could not be reconstituted for many years-if ever-and not without massive international assistance”, the report postulated.

The two paragraphs of the report were singled out and the reaction was instantenous. Former President Olusegun Obasanjo, who was then having a serious confrontation with the then National Assembly, rose to the occasion in a strongly worded letter to the Senate, rebuffing the said prediction as a glib talk.

Obasanjo's letter read: “I am sending this to you, not because I am alarmed by the report, but because if we know what others think of us and about us, we can prevent what they project for us. As a person who has participated in similar so-called 'expert group' on issues, situations and regions, I know that the predictions and projections can be wide off the mark because both politics and economics cannot be absolutely predicted and their dynamics can fool the greatest and best expert.

“But it is important for us to know that we are being rated low, not because of what is happening to us from outside, but because of what we do to, for and by ourselves internally. I believe that it is only God and ourselves that can map our present and future. No outsider can do that accurately for us. I know that some people glibly talk of the probability of Nigeria as a failed state. I believe that they are living in the past. Because they are stuck to old ideas and dreams as well as stereotypes about us and our capabilities, they cannot see the New Nigeria that we are building collectively as we move not only beyond the past but also allowing the past and present to strengthen and sustain our future.

“I believe that we can and should disprove the modern experts of the United States Intelligence Council who are like the prophets of doom and, by the grace of God, for Nigeria in this first decade of the 21st Century, we must be determined to show that we are neither a basket case nor walking on a banana peel.”

The National Assembly took up the matter, attacking what it termed a near unfriendly act by a strategic ally. Nigerian commentators then launched into debate as to whether the nation was breaking up or not, scrambling to outdo one another. A puzzling thing is that the report said so much that even disprove the possibility of Nigeria breaking up. It was either the original American report was improperly digested or a certain clique latched on those two paragraphs to score political points.

Interestingly, the National Assembly, which was then vociferously opposed to the former president, was forced to quickly rally round the Otta farmer, all in the spirit of national unity. Many analysts were then of the view that the report was sexed up to alter domestic political development. It was a smart tactic.

A careful reading of the report however showed that many home truths that nullified the possibility of the nation disintegrating were also embedded. While the report was right on the disintegration of Sudan and Somalia, it accepted that violence and killings in troubled states may not translate into disintegration.

According to the report, “states with high levels of violence will not automatically be failed states; indeed, the ability of African countries to continue to muddle along, despite high levels of violence, should not be underestimated. For instance, 20,000 people have been killed in Nigeria while that country has maintained its democratic facade.”

In another part of the report, it was stated that “the state system in Africa is unlikely to divide into Muslim versus non-Muslim states, not least because of the split personality of many African states in this respect. It is highly unlikely, no matter other domestic developments that Nigeria will develop a distinct identity as a Muslim state, although religious conflict centred around Islam within Nigeria is likely to continue.”

In the first place, violence, even when consistent, is not, and cannot be evidence of a failed state. Such setting is more like a law and order situation. At least, Turkey, Russia and others experienced violence almost on regular basis and they are not classed as failed states. The report specifically singled out the recurring violence in Nigeria as an example.

On the second count, the on-going religious violence, through the Boko Haram insurgency, is an evidence of a troubled system but not a sure sign of a break up along religious line. The report identifies the split personality of the Nigerian State and the close mixture of Muslims and Christians as an inhibitive factor against disintegration along religious line. It rightly faulted the often repeated classification of Nigeria as Christian South and Muslim North.

It is interesting to also note that this report equally proffer workable solution for overcoming many of the ills identified with African states. The adoption of federalism by Nigeria and other African states was described as suitable and in line with the continent's diversity. The report was of the opinion that federalism is more likely to succeed if the impetus for conflict is ethnic division that has a strong geographic component. This is no doubt a fact of our existence.

“As Africa's ethnic communities still have a territorial basis, federalism may well work to devolve the locus of resource disputes from the centre to the periphery. The success of federal attempts will depend, too, on the ability and willingness of central governments to permit funding of regional, alternative centres of power and authority”, the report stated.

While all Nigerian challenges cannot all be blamed on lopsided federalism, there is little doubt that close to 70 per cent of the nation's crisis is traceable to it. The report was thus helpful to some extent as it projected problems and, at the same time, possible solutions. Such reports, very critical of effects of current trends on future national outlook, can as well emanates from the Nigerian Institute of International Affairs (NIIA). American and western agencies issued many reports pointing out the strategic implications of current trends on the placement of western society in the future. The report, because it was just a mere projection, also failed on many counts. Its predictions were not iron cast as events in Africa has confirmed.

Many analysts are sure that the nation cannot break up, either on account of the Boko Haram uprising, or other threats to national unity due to four main factors namely, huge economic investments by non-indigenes, extensive inter-locking relationship among the nation's elite, the split personality of the nation on religious ground, and the existence of a strong security and bureaucratic apparatus capable of keeping the nation as one.

The practice of true federalism, as recommended by the US report and many local leaders, is however a sure way of strengthening the bond of unity within the country. Luckily for Nigerians, the National Assembly is about to commence another round of amendments to the constitution.